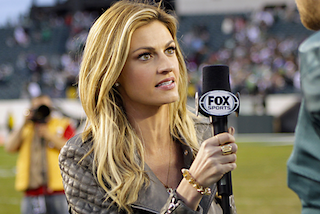 Following multiple verbal attacks on Fox Sports correspondent Erin Andrews by WEEI radio hosts Kirk Minihane, the Fox network has reportedly decided to pull all of its advertising off the more than 100 stations owned by parent company Entercom.

It reads as follows:

By now you are no doubt aware of the incidents that occurred on-air at your Boston station WEEI on July 15 and again on July 22. I am referring to the obnoxious comments made by Kirk Minihane on the “Dennis and Callahan” show regarding one of our Fox on-air personalities, Erin Andrews.

As we have previously stated to various media outlets, the comments made by Mr. Minihane were boorish and sexist. Further, the “apology: made by Mr. Minihane was juvenile and insincere. To make matters worse, the “apology” was posted under a banner (allegedly approved by your Boston VP and Market Manager, Phil Zachary) hailing ‘The Triumphant Return of Kirk Minihane.’

I had hoped by this time we might hear a sincere apology from WEEI, or perhaps someone from your office might have reached out to Fox (which through our film and television businesses is a significant advertiser on Entercom stations). However, none of that has been forthcoming, and needless to say we are disappointed.

I have discussed this issue with our senior management and our various senior marketing executives. At their recommendation, I am writing to inform you that going forward Fox’s entertainment and sports businesses will not be advertising on your stations for the foreseeable future.

I regret that we need to take this action, but as one of our executives reminded me, sometimes you need to vote with your feet.

I trust you will discuss our decision with your staff at WEEI.

Minihane initially referred to Andrews as a “gutless bitch” during his post-All-Star came coverage last week. He subsequently apologized for using those words, but in the same broadcast said of the broadcaster, “I don’t think she comes across as smart. I think Fox only hired her because she’s good looking. I think if she weighed 15 pounds more she’d be a waitress at Perkins.”

Watch Minihane’s latest comments about Andrews below, via NESN: