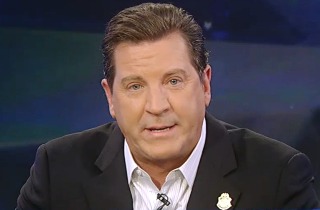 Last night, Mediaite’s own Andrew Kirell noticed how Fox News’ Eric Bolling appeared to take two very different positions on free speech. A few days ago, in talking about the attack on the Muhammad cartoon contest, Bolling declared, “Free speech is protected no matter how inciting it may be… We worry that offending Muslims somehow overrides our own constitutional rights.”

But yesterday, when Bolling talked about a high school’s art exhibit on police brutality––with one image in particular showing a bloodied man with a giant police badge in his back––he started out by saying, “I get the idea of free speech, but…”

Bolling said it was in really bad taste, in contrast to his pretty firm stand on free speech just days ago when it came to cartoons of Muhammad.

Well, the Fox host noticed the criticism and responded on The Five today to the hypocrisy suggestion. He pointed out he did bring up the First Amendment yesterday and made this distinction: