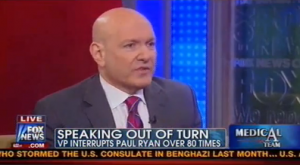 Fox News’ go-to psychiatrist, Keith Ablow, appeared on Fox & Friends Weekend to discuss Joe Biden‘s debate performance. Given that Biden’s laughter, smirks, and malarkeyisms had been dissected pretty thoroughly by the time Sunday rolled around, Ablow had his work cut out for him. How, he must have asked himself, will I make my mark? What will make people pay attention? How does one cut through the noise?

Let’s begin by noting that Ablow was asked about what Biden’s debate behavior suggests about his “personality,” not his mental state or stability. After characterizing Biden’s laughter and frequent interruptions of Paul Ryan as attempts to discredit, diminish, or disrespect his opponent, Ablow added that “Joe Biden has shown tremendous disregard for the perspectives of others,” taking the Vice President to task for being dishonest about the number of undergraduate degrees he’s obtained and about having claimed he graduated at the top of his class. In fact, Ablow wrote about these same topics in an August, 16th FoxNews.com op-ed piece titled “Inside the mind of Joe Biden.” In that op-ed piece, Ablow also wrote the following about Biden — whom he describes as being “happy to serve with a man named Barack Obama” — and his history of so-called gaffes:

From a psychological perspective, however, and without having had the opportunity to examine the vice president, personally (although I would welcome it), I can tell you there is more to Joe Biden than random discharges emanating from his cortex or random words emanating from his mouth. We show how ready we are to deny the truth when we candy-coat Biden’s words and actions for him.

Joe Biden isn’t having a senior moment when speaks with contempt about white, wealthier Americans. He’s having a moment of truth.

This is interesting because it’s the opposite of what Ablow said about Biden on Sunday. For reference, here’s what he said on TV over the weekend:

I did not evaluate Joe Biden, but if someone said to me, “listen, we want you to do what’s really required to know what happened there,” you have to put dementia on the differential diagnosis. You have to say bizarre laughter, interrupting… If this were your dad or your grandfather, wouldn’t you say, if you brought him to me, “Keith, you gotta tell me, is he suffering with dementia? Because he can’t seem to listen, he’s laughing inappropriately…”

At this point, he was interrupted by host Alisyn Camerota, who noted that his attempt at a diagnosis did not “ring true” because, after all, Biden appeared to have a solid command of the details discussed during the debate.

“I’m not diagnosing him, I haven’t evaluated him,” said Ablow, adding that he’s not “saying” that Biden suffers from dementia.

He then went on to say that “you’d want [Biden’s] alcohol level.”

But it’s not irresponsible or unethical, you see, because Ablow never said that Biden definitely is some sort of demented alcoholic who is a heartbeat away from the presidency in the final weeks leading up to an election. He’s just concerned that we might want to verify that he definitely isn’t. That’s all.

Now, I’ve appealed to Fox News before to take Ablow off its payroll. Maybe the fact that, within the span of two months, he went from dismissing criticism that one of Biden’s gaffes was the result of his having “senior moments” to floating the idea that the Vice President of the United States suffers from dementia “maybe, possibly, but hey I never said for sure” will help the network realize that Ablow — this “[f]orensic psychiatrist and author of thrillers” — is, at best, an embarrassing, fear-mongering, hate-filled quack hellbent on attention and, at worst, a demented alcoholic. Who eats children and small to medium-sized pets. I mean, I’m not saying any of that is true — after all, I’ve never evaluated Dr. Keith Ablow, eater of children. I’m just saying it might be something we’d want to look into.

Have a look at Ablow’s entirely helpful non-diagnosis below, via Fox News: