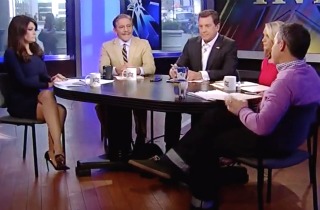 At the very end of today’s The Five, Dana Perino very briefly addressed the departure of Bob Beckel.

Mediaite was first to report yesterday that the fiery liberal voice of Fox’s popular 5 pm show is out for good.

Beckel had been absent from The Five since February 16 while recovering from back surgery. Fox executive Bill Shine said in a statement that Beckel “took tremendous advantage of our generosity, empathy and goodwill,” and they didn’t want to hold the show “hostage to one man’s personal issues.”

In a series of tweets last night, Beckel said he was “baffled” by the statement and couldn’t understand the anger there.

And then today, right at the end of the show, Perino said, “As you may have heard, Bob Beckel will not be rejoining us at this table. Bob is moving on and The Five continues.”