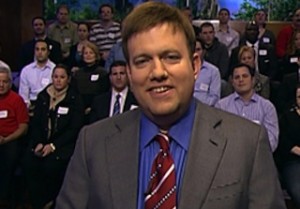 In May of 2009, the Times’ Deborah Solomon interviewed pollster and messaging expert Frank Luntz for her weekly “Questions” column. She challenged him immediately:

Your new 28-page memo, “The Language of Health Care,” was sent to Republicans in Congress and recommends that they speak about health care reform in ominous phrases. For instance, you suggest that they refer to “a Washington takeover.”

“Takeover” is a word that grabs attention.

Is it a correct description of the president’s plans for reform?

We don’t know what he is proposing. We want to avoid “a Washington takeover.”

Last December, Politifact rated Luntz’s “takeover” its Lie of the Year. It didn’t matter: the refrain that Obama’s health plan was a government takeover was already consensus on the right. And Luntz emerged unscathed.

Frank Luntz is Fox News’ go-to polling and messaging consultant. It’s only appropriate: what his fellow Fox News cohort Sean Hannity is to objective journalism, Luntz is to opinion research.

Polling gets a bad rap. This is in part because it often tells us what we don’t want to hear: that our candidate is going to lose, or that our position is unpopular. That’s polling’s role – to suss out popular opinion.

But polling gets a bad rap primarily because people see polls as inherently flawed, as manipulations of numbers or as mere reflections of the desires of the pollster. Polling isn’t seen as a statistical representation of responses to particular questions; it’s seen as a useless thermometer for minutiae, at least when we disagree with the results.

Candidates use polling strategically to guide their campaigns – not, as the popular perception goes, to inform their positions on issues, but rather to determine how best to talk about them. Polling can be, and is, used to evoke nuance.

This is why it’s often confused with spin. Polling and messaging operate in sync; polling informs which messages are most effective. However, the two differ in one critical regard: polling is informed by data, while messaging isn’t. Polling is a science; message is an art.

Luntz blurs this distinction. He intimates that his analysis is informed by statistical analysis, when often it’s simply his opinion (or, worse, his client’s opinion). Luntz is a conservative activist dressed in the garb of a scientist.

That is not to say Luntz isn’t talented. He is. It is, rather, to say that he is not objective, not scientific, that his goal isn’t to inform an audience of what people think – it’s to shape what the audience thinks. It is this that he does well.

In October 2000, weeks before that year’s Presidential election, and months before it was resolved, the New Yorker ran an article titled “The Word Lab.” The lengthy piece was a detailed exploration of the new science of political campaigns: developing and testing resonant messages that informed how candidates described their issues – and framed their opponents.

Luntz was introduced in the third paragraph. The article presents him as a Svengali whose finger is surgically attached to the pulse of the American voter. Or, rather, consumer – Luntz is cited in the piece as saying that he intends to get out of politics, and instead focus on corporate and media clients.

A quick biography is given. Luntz grew up in the Republican establishment, working for, among others, Reagan’s pollster. He was hired early in Ross Perot’s quixotic run for the Presidency (the first one), providing the budget and platform to make a name for himself. After Perot, he worked for Newt Gingrich on language around the Republican “Contract with America” in 1994; later, Luntz helped Rudy Giuliani in his mayoral bids. When the magazine caught up with him, he’d just been hired by MSNBC to run focus groups at the party conventions in 2000.

Luntz’s contributions to the persuasive vernacular are legion. He’s credited with creating the phrase “death tax” (meant to replace “estate tax”), “climate change” (meant to soften “global warming”) and “tax relief” (instead of “tax cuts”).  In 2007, he told Fresh Air’s Terry Gross that “Orwellian” should be considered a compliment.

Less than a week after Luntz’s national coming-out in the New Yorker, Salon presented a different take. In an article titled, “Why should we trust this man?,” Dante Chinni walks through a litany of reasons why we shouldn’t.

Perhaps most damning: Luntz’s 1997 reprimand from the American Association for Public Opinion Research for the work he did on the Contract with America. Luntz presented the Contract publicly as having robust support – but failed to offer the data that supported his claim. Chinni pressed him on the issue.

But what about AAPOR’s claim that when you make results public, you owe it to people to release all the data. “I don’t agree,” [Luntz] says. “Say you poll on an environmental issue, and on eight of the 10 questions the numbers are in your favor. Why release the other two? It’s like being a lawyer … This is my case, and these are the strong arguments and these are the weak ones. You go with your strongest case.”

There are a few problems with this analogy. First, pollsters aren’t lawyers; they are (in theory) researchers, and are treated by journalists as such. Second, in a trial there are prosecutors and defense lawyers, and everyone is working off the same page. There is an established pool of evidence that either side can argue over. What Luntz proposes is a trial in which a lawyer makes his case with no opposition, and no opportunity for a jury to consider the source.

“These are not complicated questions,” says Diane Colasanto, who was president of the AAPOR when it reprimanded Luntz. “It is simply wanting to know: ‘How many people did you question? What were the questions?’ He did finally give us some information, but it wasn’t enough. It didn’t really explain what the figures were based on. All we could tell was it seemed like there might have been some survey done.

Chinni’s article gets at the heart of Luntz’s problem: it’s hard to see where the political advocate ends, and the political scientist begins. That is, if it ends at all – which poses a problem for a man looking for work from corporations and the media.

Luntz’s efforts in this regard got off to a rocky start. In October, 2001, Luntz’s firm, Luntz Research Companies, were hired by a prominent energy company to help suggest ways in which the company’s leadership could improve employee morale. It was an uphill fight, given that the company was Enron. It filed for bankruptcy five days after writing Luntz’s check. (And in a classic lie-down-with-dog-get-fleas scenario, Enron’s bankruptcy counsel filed a lawsuit in 2003 seeking to get their money back. The case was settled out of court.)

His relationship with MSNBC took a turn for the worse as well. In the run-up to the 2004 general election, progressive-leaning outlets – including Media Matters – took issue with assigning Luntz to provide analysis of voter reaction to political debates. MSNBC quickly fired Luntz, who insisted that he acted without bias, and had not done any work for GOP candidates since 2001. This claim was rapidly debunked.

By 2005, Luntz was a regular on Fox News. As the contentious 2006 and 2008 races heated up, he appeared time and again, opining on subjects not always directly related to polling or messaging. (The best catalog of these appearances is kept by Media Matters, an admittedly antagonistic foe of Luntz’s. And vice versa.)

Even when he was sharing his opinion on matters of messaging and language, Luntz often hewed more closely to his political prejudices than an objective assessment. Take, for example, then-Senator Obama’s famous 2008 speech on race and Reverend Jeremiah Wright, titled “A More Perfect Union.”

Take a look at Luntz’s opinion of the speech, as stated on Fox News. He implies that the speech was damaging, that it didn’t settle the Rev. Wright issue, that Obama should not have used a teleprompter. He accuses Obama of inciting class warfare, and raises questions about whether or not Obama heard Wright’s incendiary sermons in person.

In contrast, here are the views of academics and political experts who’ve presumably never worked for Republican candidates for office. They use words such as “stirring,” “serious,” and “brave.” None raises concerns over damage done. No one mentions the teleprompter. And Obama, of course, went on to overwhelmingly win the Presidency.

A similar pattern emerged in Britain’s 2010 election. Conservative David Cameron eventually won the position of Prime Minister after besting Labor’s Gordon Brown and Nick Clegg of the Liberal Democrats. During the country’s historic television debate – a new addition to the 2010 election – Luntz led focus groups. He later reported his findings to the Sun newspaper: Cameron was most preferred, followed by Brown and Clegg. While matching the final results of the election, two independent polls of voters cited by the BBC indicated that the winner of the debate was, instead, Clegg.

There are links worth mentioning here: Luntz’s stateside employer at Fox News and the publisher of the Sun were one and the same – Rupert Murdoch. Of course, Murdoch’s ties to Cameron were revealed over the course of this summer’s phone hacking scandal; the conservative politician was also endorsed by the newspaper.

It’s unclear the extent to which Luntz lets his relationships color his opinion. At times, Luntz’s stated opinion on Fox is one that directly benefitted him or a client, as happened last year when he referred to a client’s ad as one of the best of the 2010 cycle. At others, the facade of objective research slips, as when he chided a focus group for returning a response he disagreed with.

During the 2008 election, entertainers Penn and Teller, frustrated with the media’s reliance on what they saw as biased polling, laid bare Luntz’s true talent: persuasion.

The segment ends with a call to action. When viewers see a poll, they’re asked to shout a battle cry against those who’d seek to use polling to shape public opinion: “Fuck you, Frank!”

Last month, he made an appearance on The Colbert Report, providing messaging guidance to Stephen Colbert’s nascent SuperPAC.

It was the perfect venue for Luntz. Colbert and Luntz are both showmen. A participant in a Luntz focus group describes the experience.

This is the Frank Luntz no one gets to see. This is the man at work. With the camera turned away, silhouetted by the TV lights in his suit and tennis shoes, he would hop, dance and thrust his arms about. As the group got rowdy, he settled his hands to silence the mob so the camera could zero in on a speaker. As the energy died, he would plead, point and coax the crowd until someone picked up the ball. This is what it takes to fill six minutes of television with an untrained, uncoached focus group. At the end of his symphony, there was no applause for Dr. Luntz.

The difference between Colbert and Luntz is in the show each puts on. The former pretends to be a media talking head; the latter, a rational expert presenting science. Luntz has a doctorate, but he only plays a doctor on TV. Who he actually is in those appearances (usually; not always) is a salesman – a huckster pitching his clients, his ideology, or himself.

Luntz has a framework to sell and Fox is his QVC. Make up your mind fast, America. Time is running out.