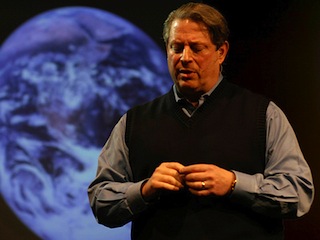 In a couple days, Al Gore is initiating “24 Hours of Reality,” an event in which he will give a special presentation once an hour every hour for a full day about man-made climate change. These presentations hope to finally convince skeptics of the direct connection between human influence and global warming. All in all, it sounds like a great plan because, as we all know, the biggest issue the skeptics have is that they haven’t heard enough from Al Gore.

“’24 Hours of Reality’ will broadcast a presentation by Al Gore every hour for 24 hours across 24 different time zones from Wednesday to Thursday, with the aim of convincing climate change deniers and driving action against global warming among households, schools and businesses.

The campaign also asks people to hand over control of their social networking accounts on Facebook and Twitter to it for 24 hours to deliver Gore’s message.

New slides! Oh, I’m sure every single Fox News host is getting started on their “We were wrong” editorials as we speak.

That Reuters article concludes by pointing out an opinion poll showing that “concern about climate change in the United States” is now at 48%, down from 62% in 2007, a year after Gore’s big documentary, An Inconvenient Truth. That number hasn’t dropped because there’s been less proof in the past four years (Oh yeah, and if anyone tries to bring up this, please do try to remember how that story actually ended).

The really inconvenient truth is that “climate change” has become “political and, therefore, no one’s going to get persuaded by simple “proof” any more. Gore is seen by many, not as an expert, but rather as someone on the other team, an enemy, a guy who called them racist (despite the full quote of what he actually said).

Long story short, these skeptics just don’t like him. They will never believe anything he says because it came out of his mouth. One of these new slides could be a signed letter from God Himself saying “Dear Al, Please get everyone to stop messing up my planet. Love, Yaweh XOXOX” but, because Al Gore’s involved, the response will mostly be jokes about his private jet usage and weight.

That’s just the way it is. Sad? Yes. But, then again, I’ve already resigned myself to the fact that my grandchildren will grow up in a flaming post-apocalyptic Hellscape where humans kill each other for a drop of water and everyone wears leather and football shoulder pads for some reason. Whatever. I’ve accepted it. I plan on dying in a totally bad ass motorcycle accident in a couple years anyway so, not my problem.

However, Al Gore still seems pretty set on trying to change things. However, he just has to accept that no one who hasn’t been persuaded already will ever be by him. His political enemies have ruined his reputation too much (and he hasn’t helped). If he wants to really stop this thing, he should stop working on his message and start looking for a new messenger.

And, if he doesn’t? Maybe all those Fox News hosts were right about him being in it for the glory after all.