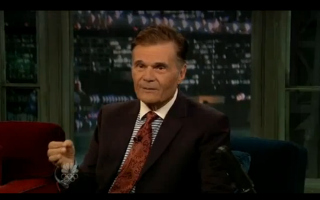 “Jimmy — what do you want to talk about first?” Willard joked as soon as he sat down at the couch. “Let me say this: It’s the last time I’m gonna listen to my wife when she says, ‘Why don’t you go out and see a movie?'”

He continued on, “I see this one [theater]. It had such an exotic look to it. I thought maybe there’s hula dancers in there. Maybe there’s Mai Tais!”

“I went in and I realized I was the only one awake and sober… and conscious,” he joked to much audience laughter. “It was like a trip down Alice in Wonderland and down the rabbit hole.”

The two comedians then traded one-liners about which exact movie he went to see:

Willard then offered a heartfelt explanation for the whole ordeal. “It’s very embarrassing,” he confessed. “It’s embarrassing as hell! But let me say this: nothing happened. I did nothing wrong, everything’s being sorted out as we speak.”

“I have great respect for the authorities,” he continued. “When we need a policeman, God bless ‘em, they’re there. But, if you’re in the wrong place at the wrong time, everything seems suspicious.”

He reiterated how embarrassed he is, and added that it has been “Very painful, and I’m trying to laugh it off.”

And laugh it off he did, concluding that “my summary of the evening is that it’s an interesting theater, boring movie, and a great place to take a nap.”

Watch the interview below, via NBC: