From The Mediaite Vault: Larry King Takes On Gangsters (And Loses) In 1961 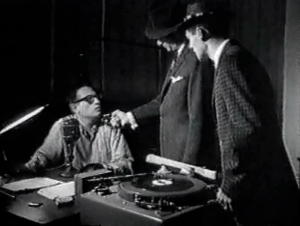 Welcome to the latest installment of our summer series in which we head back into the Mediaite Vault (*cough* the Internet *cough*) to find some choice moments showing our favorite media personalities back when their journalism hit a little less hard. Consider it meeting the press before they were the press. This time we take a look at a very young Larry King as he takes on some gangsters back in 1961 and (SPOILER ALERT!) loses.

In the wake of Larry King’s momentous announcement last night that he will be ending his groundbreaking series Larry King Live this fall, we can be sure that the next few months will feature a number of career retrospectives on the man. We can also be sure that none of them will mention Miami Undercover. Now, I know what all the King fanatics in the audience are saying right now. They’re asking, “Whoa, Jon, why on earth would King’s retrospectives not feature his first big radio show, the one where he managed to get guests like Frank Sinatra?” Well, that’s because I’m not talking about the radio show, Miami Undercover. I’m talking about the short-lived detective series Miami Undercover.

The series, which ran for one season of 38 episodes in 1961, featured Lee Bowman as Jeff Thompson, an investigator for the Miami Hotel Association who solves murders for some reason (something the actual Hotel Association doesn’t seem to do). He does this by creating a Bruce Wayne-esque double life as a hot shot playboy and cozying up to Florida’s criminals who would never suspect that a guy with a moustache so creepy actually works with the cops.

Thompson is joined by his sidekick (he literally introduces him as “my sidekick”), middleweight boxing legend, Rocky Graziano, who’s playing himself. Apparently, in the universe of the show, Graziano decided not to follow his boxing career up with television stardom and instead hung around Miami getting insulted and condescended to by a sleazy investigator with a creepy moustache. On the bright side, they at least gave Graziano a chance to punch people really hard in most episodes. However, in the pilot, they make him wear a truly embarrassing fry cook outfit while he does it. That’s the thankless job of sidekicks. The boss goes undercover as a playboy and you have to spend a day flipping burgers.

Now, I know what all of you readers out there (King fanatics and otherwise) are saying right now. You’re all asking, “Whoa, Jon, what on earth does this have to do with Larry King?” Well, this is why:

King was given a cameo role in the first episode of the series. Presumably they cast him as either a link to actual Miami culture (the series was filmed in California) or as an apology for totally ripping off the name of his radio show. The episode is titled “The Thrush,” which a quick Google search tells me is “a yeast infection of the mucus membrane lining of the mouth and tongue.” Apparently the show was working from a different definition of the word since Thompson repeatedly tells us in his voice over that the female lead (and “many girls like her”) would qualify as “a thrush” and that just seems mean and gross.

In the episode, Larry King, the Miami radio DJ, stretches his acting talents by portraying a Miami radio DJ. His character is Sleepy Sam, a DJ who hosts a popular late night show where he repeatedly makes yawning noises which, to me, doesn’t seem like a great way to keep your audience attentive. Unfortunately, King doesn’t make it through opening credits as a couple of gangsters burst into the booth and try to force Sam to play a record. Sam refuses (he doesn’t take “payola”) and tries to bust the two “creeps” on air which leads to a whole bunch of gunshots and, presumably, a lot of confused listeners.
King is incredibly young in the video (he was born in 1933 and the episode aired in 1961 so, if my math is correct, he was about on his fifth wife) but it’s still clearly him. He doesn’t have the suspenders yet but the glasses are there and, most likely, actually in style. He does a great job in the short role and the viewer really feels for poor Sleepy Sam. The viewer probably feels even worse for the radio station’s engineer who gets shot before he even gets a line out. Poor guy.

So, remember folks: when Larry King Live ends in a few months, we may have lost one of the greatest interviewers of all time. However, at least he wasn’t blown away by a couple of gangsters in a Miami radio station.

If you haven’t already, check out the video above (I’ve included the opening scene as well as the totally balling opening credits. If you want to see the full episode, it’s available in public domain over at the Internet Archive. I wouldn’t say it’s the most entertaining way to spend a half hour, but you all deserve to know how Thompson brings Sleepy Sam’s killers to justice. Here’s a teaser: the sleazy investigator sleazily tricks a young singer into thinking he’s using her for sex. Gee, what a lovable main character!

Until next time, this is Jon signing off from inside the Vault!