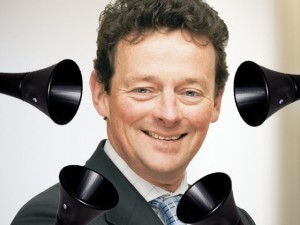 When South Africa brought us the World Cup, the country also introduced the rest of the world to vuvuzelas (you know, those buzzing horns you can hear in the background of every single match). Sure, vuvuzelas can be fun at sporting events, but could they serve a larger purpose? The Vuvuzelas for BP project seems to think so.

But how exactly will vuvuzelas help resolve the BP Oil Disaster? Well, here’s the plan:

In order to put a bit of public pressure on them, we plan to buy 100 vuvuzelas and hire 100 vuvuzela players off Craigslist to play in front of BP’s International Headquarters in London for an entire work day. Ideally, the players will keep coming back every day until they fix the gusher.

Project leader Adam Quirk of Brooklyn has made it clear, however, that the plan is a limited time offer: the project will only be funded “if at least $2,000 is pledged by Wednesday Jul 7, 7:27pmEDT.” At the time of this post, $1,107 wass pledged with 107 backers.

An anonymous commenter on the project’s website asked a question that has likely crossed others’ minds as well:

How about instead of wasting money on vuvuzelas for what is, in essence, a worthless stunt enacted only for internet attention, everybody takes their $10 and donates it to relief funds to aide real people in the Gulf affected by this tragedy. $2000 would go a long way in the region.

@anonymous How about you do both? Publicity is important, because this is just one way to keep pressure on BP, lest they cycle out of the public eye like Afghanistan and Iraq have. People have short attention spans, news networks doubly so.

Why are you taking the time to write a comment on the Internet when you could be spending that time cleaning oil from the sand? See what I mean? It’s not an either/or situation.

Several other commenters said they’ve donated money despite being broke students, while others called it worthless or suggested the vuvuzelas should be sounded in front of BP executives’ mansions (so as not to trouble the other workers in the building). Call it what you want, but the idea is without a doubt one of the most creative so far.