‘Gay Like Me’? MSNBC Interviews Straight Man Who Posed As Gay For A Full Year
video

‘Gay Like Me’? MSNBC Interviews Straight Man Who Posed As Gay For A Full Year 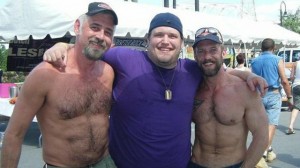 People always talk about experimental phases that young people go through. Well, meet Timothy Kurek, an insight-curious guy who was just social experimenting for a whole year. The self-described former bigot decided to see what it was like to come out in America, so he told his family and friends he was gay, hung out in the nearby “gay-borhood,” and lived as a homosexual for a year. All while being straight. He’s now writing a book about it.

That may sound tough to you, but it’s only a year. Think of how many politicians have been posing as hetero for their whole lives!

Seriously though, this may be one of the most uncomfortable segments I’ve seen in a long time. I mean, it’s not just me, right? This whole thing is slightly odd. Maybe it’s the fact that MSNBC’s Thomas Roberts is actually gay so one can’t help but infer a slight undercurrent when he asks Kurek how he would “validate” the experiment to people who are offended by him hanging out in some bars and saying he knows “what the heck it’s actually like to be a gay man.” Or maybe it’s because, since this is a news show, there are about a bazillion pertinent questions that go unanswered.

The closest we get to any of them is with this quick comment from Kurek:

“I was doing everything I possibly could to understand and going as far as I could. But, being that I’m straight, I was obviously very limited in what I was able to do.”

Anyway, it all seems like this modern day John Howard Griffin without the face paint had his heart in the right place. So good for him. Good for the book. And bad for that poor guy sitting in the gay-borhood right now and thinking, “Oh, that bitch better not use real names.”