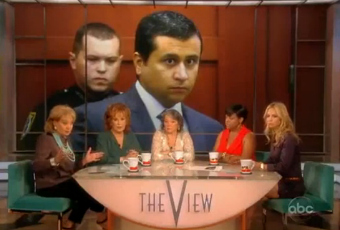 What a bizarre morning on The View. Barbara Walters was apparently supposed to interview George Zimmerman, but that interview never came to pass, and so she took the opportunity to explain why on The View.

Walters was scheduled to interview Zimmerman after Sean Hannity did, but when she flew to Florida to do so Zimmerman told her he would not consent to the interview unless she met certain conditions — conditions, Walters said, that she could not meet “as an employee of ABC.” Was it a “quid pro quo” situation, Joy Behar asked? Walters told her “I won’t get into it,” but did say Zimmerman is “desperate for money” and refused to do the interview with her against the advice of his lawyers.

Walters ruefully congratulated Hannity on his get, and shared a bit of what she heard from Zimmerman in Hannity’s interview — he claims that it was “God’s will that he did this” and told Hannity “I feel it was all God’s plan.” Sherri Shepherd and Elisabeth Hasselbeck were not swayed by this, with Shepherd saying if Zimmerman goes to jail that’s “part two of God’s plan,” and that was the end of the segment.

That is, until Zimmerman’s lawyer called the show, interrupting the last ten minutes, telling Barbara that Zimmerman was willing to do the interview. From her perch on the couch Barbara shut them down, saying pointedly “We will now continue with our program, and with the people who agreed to interviews and [came] here” before throwing it to a medley of 70s classics written and sung by Paul Williams.

Part one of the segment below, via ABC:

And below, watch where Zimmerman and his lawyer calls in and gets rejected: