Geraldo: U.S. Should Partner with Syrian Dictator Assad against ISIS 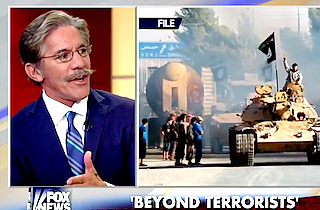 Rivera’s comments came after Chairman of the Joint Chiefs of Staff Martin Dempsey said yesterday that striking at ISIS targets within Syria, where the group formed, was essential to defeating them. ISIS first arose within the Syrian civil war, where Assad has fought them for the better part of two years, and the idea of partnering with Assad against the group has been bandied about in the past couple weeks.

“I would like to see a declaration of war against ISIS,” Rivera said. “I would like to see ISIS removed by any means necessary, including — and this is probably the most controversial thing I’m going to say this morning — including the rehabilitation of the Syrian dictator Bashar Assad and his Shiite forces who have successfully kept them at bay. [ISIS] only controls one third of Syria.”

“The enemy of our enemy is our friend,” Rivera said. “I want us to rehabilitate the dictator in Damascus. I think he can be forced to make his own government more inclusive, head to some kind of settlement of the Syrian civil war and the Syrian army, a fine army, join with American air power and our Iraqi allies, all must make common cause against this dreadful threat to civilization.”