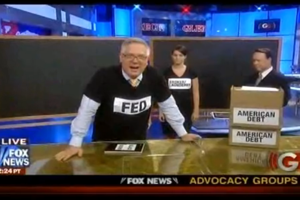 The function of the US Federal Reserve is often complicated, secretive, and, thus, difficult to explain. That’s why Glenn Beck left the chalkboard clean today, going high-budget with t-shirts, props, extras and all sorts of (what we hope is) Monopoly money.

Beck, playing the protagonist role as the Federal Reserve in what quickly went from “Bob Barker“-esque game show set to high school stage, asked his fellow actor, “The Treasury,” to print some money for him so that he could buy some debt. Yes, the Fed has the assets to back it up, but no, the Treasury can’t see the “little black book” that proves they do. Now that the Fed has the money, it can’t buy the debt straight from the Treasury, so the Treasury sells it to a third actor, the “Broker” (or, as Beck calls her, the “Money Launderer”), to get through the loophole.

It’s a zany way to do it, and Beck’s detractors will certainly cry “bias” at the interpretation, but does the average American really know what the Federal Reserve does, at all? If anything, this will give many viewers who had no information at all at least a base with which to start understanding why people from all parts of the political spectrum, from Rep. Ron Paul to Rep. Alan Grayson— who co-sponsored a bill on this together— want to audit the Fed (and why others don’t).

We won’t ruin the end of the story for you, but the rest of the segment from Fox News this afternoon below: