Gov. Deval Patrick Defends Bain: Bain Is A ‘Perfectly Fine Company,’ ‘I’ve Got A Lot Of Friends There’
Video

Gov. Deval Patrick Defends Bain: Bain Is A ‘Perfectly Fine Company,’ ‘I’ve Got A Lot Of Friends There’ 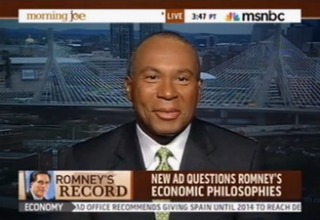 Massachusetts governor Deval Patrick appeared on Morning Joe Thursday, where the Democratic Obama supporter ended up defending Bain and his “friends” at the company.

After getting some sports talk out of the way, Patrick accused Romney of selling unfulfilled “lines” to the people of Massachusetts, particularly where job creation was concerned. But, later, he offered a defense of Romney… or, rather, a defense of the company that’s been so closely linked to the candidate this election season.

Host Willie Geist had asked Patrick whether Romney’s past at Bain at all impacted “the way he governed or drew up policy.”

“I think that the issue isn’t about Bain,” Patrick responded. “It’s about whether he’s accomplished, in either his public or private life, the kinds of things he says he wants to accomplish for the United States. And when it comes to growing jobs in the public sphere or fixing government, the record on that is not very strong. In fact, I would say that there is one profoundly important thing that Governor Romney did when he was governor of Massachusetts, and that’s to sign the health care reform bill.”

Panelist Donny Deutsch followed up by asking whether Patrick thought that focusing on Bain is actually not the best strategy for Democrats at this point. Here’s his response:

Well, I think that the Bain strategy has been distorted in some of the public discussions. I think Bain is a perfectly fine company. They’ve got a role in the private economy and I’ve got a lot of friends there on both sides of the aisle. I don’t think Bain is the point. The point is, has he actually created jobs, as he says he has, in the private sector?