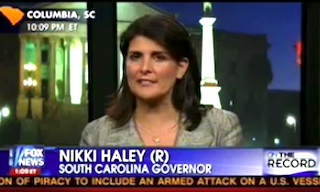 “It’s creepy. I still hurt every time I see it,” Haley bawled. “This is not typical of South Carolinians. This is typical of union thugs.”

On The Record accentuated the piñata outrage with a sensational chyron, SHOCKING ATTACK.

Haley is not the only one offended over this “piñata attack” as the outcry has spread throughout the blogosphere.

RedState’s Erick Erickson claimed Republicans would be accused of a hate crime if someone had hit a Democratic piñata.

Were Nikki Haley a Democrat, the media would make this the front page story across the nation — racist tea partiers beating up the minority governor in effigy.

But no, Nikki Haley is a Republican minority. The media views most stories like this in terms of victim and victimizer and a minority who signs on with the Republicans has, in the mind of so many reporters in America, chosen to join the victimizer class. Therefore, when she herself is a victim, it’s just payback.

A diarist on the liberal blog Daily Kos even condemned the piñata “attack” saying it represented violence against women:

Has everyone gone to the zoo about this?

Let us put into perspective, the meaning and history of the piñata.

As About.com’s Suzanne Barbezat explains, “The piñata is said to have originated at the same time as Mexican Christmas or posadas, in Acolman de Nezahualcoyotl, in the present state of Mexico, near the archaeological site of Teotihuacan.”

“In 1586 the Augustinian friars in Acolman received authorization from Pope Sixtus V to hold what were called “misas de aguinaldo”, which later became the posadas,” Barbezat goes on. “It was at these masses that were held in the days leading up to Christmas that the friars introduced the piñata. They used the piñata as an allegory to help them in their efforts to evangelize the native people of the region.”

“The original piñata was shaped like a star with seven points and represented the seven deadly sins, and the bright colors of the piñata symbolize temptation. The blindfold represents faith and the stick is virtue or the will to overcome sin. The candies and other goodies inside the piñata are the riches of the kingdom of heaven. Thus teaching that with faith and virtue one could overcome sin and receive all the rewards of heaven.

Today in Mexico, piñatas are traditionally an important part of birthday parties and other parties for children. They also figure prominently in the celebration of posadas at Christmastime. Piñatas now come in a wide variety of designs, such as cartoon characters and animals.”

In layman’s terms, here’s a clip from Disney’s The Three Caballeros, explaining the origin of the party game:

So can we all take a chill pill about this woman hitting a piñata? The video clearly shows that Dewitt was at a party playing a popular party game. Are we going to have to start banning Dora The Explorer piñatas because they represent “violence against women”?

Piñatas are now a gateway game to violence? Cut the silliness.

Dewitt explained to ABC News that there was no “ill intent” with the piñata towards the South Carolina governor.

“They made it and I would have played the game with them no matter it would have been pin the tail on the donkey with Nikki Haley’s face on it. I still would have played,” Dewitt told ABC News over the phone. ”There was no ill intent. We were certainly have a good time. I’m not mad or angry.”

Just as Pedro says in Napoleon Dynamite, “They say you’re not allowed to have pinatas that look like real people, but in Mexico we do it all the time.”

Let me be perfectly clear, it would be one thing if someone took an effigy of Haley and burned it or hung it, which would be totally reprehensible and something legitimate to condemn.

But Dewitt was hitting a piñata at a party — a conventional, noncontroversial, fun activity that Republicans and Democrats should both be free to enjoy. I would be perfectly content if conservatives wanted to play with an Obama piñata, if it was in the context of a party. This criticism of Dewitt seems way over-the-top.

If anything, I hope this so-called incident sparks a national dialogue on piñatas.

Watch Haley get emotional about the piñata below via On The Record.