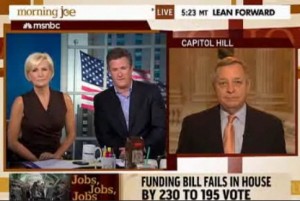 On the heels of the House of Representatives’ failure to pass a continuing resolution to fund the federal government pat the end of the month, Sen. Dick Durbin appeared on MSNBC’s Morning Joe today to push back against GOP members trying to blame the impasse on President Obama. He told host Joe Scarborough, “We’ve seen this movie before,” which is true. Unlike The Godfather, though, this sequel doesn’t promise to be any better than the original.

We all remember the nail-biting finale of the last shutdown showdown, in which the President and the Democrats had to sell John Boehner the $38 billion in cuts that he originally asked for. This time, House Republicans balked at approving a continuing resolution that, as Durbin points out, they had already agreed to.

“Last night, Eric Cantor got on the news and said ‘Well, it’s all President Obama’s fault.’ C’mon, give me a break. This is an agreement which we reached, Democrats, Republicans, with the President, to move forward and fund this government.”

Durbin spoke optimistically about the chances of passing the President’s jobs bill, and of the Supercommittee’s ability to avoid setting off those onerous triggers if it doesn’t reach an agreement. The BBC’s Katty Kay, though, correctly noted that the Congress’ inability to pass something it already agreed to doesn’t inspire much confidence.

To outside observers, it must be mysterious, indeed, to see the small Tea Party minority control every policy fight, and to see the party in power almost helpless. It’s a lot easier to be a wrench in the machine than to be the machine itself.