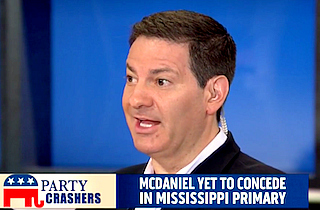 On Thursday morning a Morning Joe panel considered whether several primary losses suffered by the tea party — their only victory coming thanks to Virginia’s Dave Brat, who had been abandoned by national tea party groups — as well as a failure to elect one of their own to a House leadership position meant that House Speaker John Boehner (R-OH) was freed from having to appease the far-right faction of his caucus.

Bloomberg’s Mark Halperin disagreed, arguing that the leadership races were about internal House politics, not ideology, and that the electoral losses did little to ease the tea party’s grip on congressional Republicans’ agenda.

“There are two things about the tea party that suggest strength and not weakness as they are losing all of these races,” Halperin said. “One is the midterms are shaping up to be great for the Republicans. The splinter within the party does not seem to be a short term problem for November.”

“The other is: look at the legislative agenda,” Halperin continued. “The Chamber of Commerce is pouring money into winning these races. What does the Chamber of Commerce want? Immigration reform, infrastructure, the Ex-Im Bank renewed. McCarthy wins the leadership race and then flips and says let’s get rid of the Ex-Im Bank. The tea party agenda on talk radio and in Congress is still calling the shots. Boehner, Josh [Green] says, should be liberated, but I don’t see it right now. ”