Hannity And Guest Get Into Shouting Match: Can I Talk, Or You ‘Want To Go On Your Own Personal Jihad’?
video

Hannity And Guest Get Into Shouting Match: Can I Talk, Or You ‘Want To Go On Your Own Personal Jihad’? 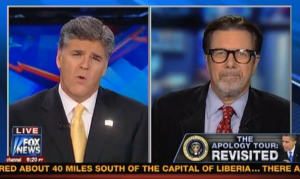 Sean Hannity invited Steve Murphy and David Limbaugh to discuss the President Barack Obama’s “apology tour” — a point Mitt Romney brought up in last night’s debate. The discussion, however, quickly turned into shouting, with Murphy growing frustrated with being interrupted.

Hannity asked: Why does Obama go around the world talking about America’s faults? Why not, instead, trumpet its strengths? Murphy said Hannity wasn’t listening to Obama when he spoke about going after Al Qaeda.

Hannity interjected, asserting that the president has lied about Libya, with Limbaugh chiming in that Murphy wasn’t addressing the issue at hand, which is the apologizing.

“Do I get to answer?” Murphy asked. “Or do you want to go on your own personal jihad here?”

“You’re accusing me of jihad, Steve? Holy war?” Hannity replied. “You’re sure you don’t want to walk that back?”

“I don’t get to answer, right?” Murphy asked. “Neither one of you are going to let me answer the question, are you?”

Murphy went on to make his point that Obama gave a speech in Egypt and three years later, we’re seeing the Arab Spring. Hannity pointed to Obama calling the country “arrogant” and “guilty of torture.” When he says these things, Hannity asked, “isn’t he apologizing for American exceptionalism?”

As Murphy vehemently said, “Not at all,” Hannity interjected to note that question was for Limbaugh — though Murphy wasn’t quick to let up. And the panel reached its close with Limbaugh and Murphy talking over each other, heatedly disagreeing.

Hannity closed it out noting that Obama’s apologizing has been “embarrassing.”