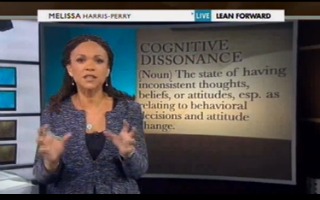 On Saturday, MSNBC’s Melissa Harris-Perry took a look back at this week’s hurdles for the Romney campaign, chalking up the polarizing comments the candidate made about the “47 percent” of voters who see themselves as victims and who feel entitled to things like food and housing as evidence of Mitt Romney‘s “cognitive dissonance.”

“Cognitive dissonance,” she explained, “is when one person holds multiple beliefs, thoughts, or attitudes that are inconsistent with each other. Cognitive dissonance seems like the best way to explain the muddle of ideas expressed by Mitt Romney in a video that emerged this week.” Romney, she added, is “struggling to hold two inconsistent beliefs about the essence of the American condition at the same time.”

She went on to explain just what those beliefs are:

In one breath, Romney dismisses nearly half of Americans. Why? For shirking their civic responsibility of paying income taxes. That 47 percent who is too poor, too elderly, or spent too much of their life serving this country in the military to pay income tax. Ok, so, paying taxes is the most important duty Americans have. Except, in the next breath, Mr. Romney claims that any good, responsible American should support him because he thinks people should pay less in taxes. Which is it? Is paying taxes the patriotic duty of all citizens? Or are taxes a job-killing burden imposed by greedy bureaucrats?

This type of cognitive dissonance is common in the right-wing discourse of the Republican party. And if you are a corporation that gets tax breaks, public subsidies, government contracts, and favorable trade protection, then “you built that.” But if you are a person-person rather a corporation-person and you get tax breaks or food subsidies or veterans benefits, then you’re undeserving and dependent.

Cognitive dissonance is the only thing that can explain why Romney would, in one breath, criticize President Obama because there are not enough jobs and, in the next breath, claim that the unemployed simply refuse to work. It’s cognitive dissonance that allows a man that inherits wealth and privilege to demean anyone who doesn’t pull themselves up by nonexistent boot straps. Cognitive dissonance that lets Romney claim he believes in meritocracy while handing out $200,000 in bonuses to top campaign aides who clearly are not on their A-game. But no matter how muddled and dissonant his reason is, I want to pause and take him seriously. We have been asking for the real Romney to please stand up. Well, here he is. Romney has not called his 47% comment a gaffe — just inelegant phrasing important what he believes.

And so, she concluded, we need to take Romney at his math.