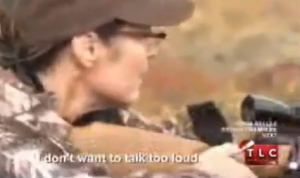 It turns out there’s a lot more to hunting than buying a gun, aiming it at a living thing, and pulling the trigger—at least, according to The Awl’s Abe Sauer. Yesterday, he published a piece that claims the latest episode of Sarah Palin’s Alaska, in which Palin and her father go caribou hunting, “absolutely exposes Palin as a charade” who doesn’t truly know the first thing about the sport.

Since I, too, don’t know the first thing about hunting, I’ll leave it to Sauer to explain why Palin’s supposedly a fraud:

For starters, Palin and pa head out on a long hunt without bothering to sight in Palin’s rifle, a mistake no serious hunter would ever make. Why Palin’s dad chose for her a “varmint rifle” for a caribou hunt and why Palin, an admitted “moose hunter,” would not question such a gun’s appropriateness is never answered.

…Several hunter friends to whom I showed the video were less than impressed. All agreed that she did not look like she had handled a gun many times. One, who just posted his November kill on his Facebook profile, said “I would not hunt with her.”

In the episode, Palin is handed a second gun, which, thanks to good video editing, she uses to down the animal in one shot.

But knowledgeable hunters would have all recoiled in horror watching Palin immediately place her finger on the trigger of the “hot” Savage 110 as it was handed to her. Keeping one’s finger off the trigger until the very moment of the shot is the first lesson any responsible hunter ever learns.

Much of Sauer’s evidence comes from negative comments left on Palin’s Facebook page by hunters who cried foul after watching the show. As one said, “No one who is a true hunter lets others carry their rifle or can’t load their own shells. Sarah, you are a phony in this area of your ‘skills.'” Others pointed out that it was odd for Palin not to bring her own rifle on the hunt, since, in Sauer’s words, “familiarity with one’s weapon is a core principle of hunting.”

Palin also drew derision for asking, “Does it kick?” after being handed a rifle. “‘does the rifle kick’ what kind of a question is that? Doesn’t matter if it kicks or not you shoot it the same. That was a girly question momma griz,” said another commenter.

Setting aside the sexism in that last comment, to this untrained eye, it does seem as though these critics have a point. Still, reality shows are heavily edited and often much more staged than “real;” that fact could account for some of the discrepancies viewers noted. Sauer also writes that other commenters across the web have come to Palin’s defense, though he also thinks they sound a little too, well, defensive:

In the tradition of justifying anything to preserve a dear illusion at any cost to reason, a commenter on Hannity’s forum dismissed questions like so: “You’d have seen her dad take a tumble while caring the gun she used. He must have knocked the scope out of alignment.” Another hunter in the 24 Hour Campfire forum reasoned, “I bet the producers of that show knocked that messed with the scope to make it more dramatic,” while another theorized, “If I had to guess, it’d be someone on the set messed with her scope with promises of wealth to make her look stupid.”

Any rifle aficionados from the peanut gallery want to give their two cents? The clip in question is below.