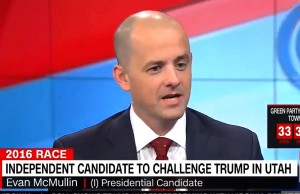 In response to Donald Trump‘s latest praise of Vladimir Putin, independent presidential candidate Evan McMullin suggested on Friday that the Russian President may very well have some major dirt on the mogul.

The #NeverTrump longshot candidate appeared on CNN, where he explained that Putin is one of the world’s most destabilizing political forces, despite what the Trump campaign says about him being a strong leader. The former CIA operative also made a point of bringing up several of the troubling developments Trump was facing just before Paul Manafort left his campaign.

“I hear from some of my old intelligence friends that Donald Trump has been engaged in some activities in Russia that Vladimir Putin may be using to blackmail Trump,” McMullin said “There is a lot going on there that I don’t think has come to light fully…You can see it in Donald Trump’s actions.”

When John Berman and Kate Bolduan asked McMullin to elaborate, he eventually pointed to details like Trump supporter General Michael Flynn‘s connections to RT America. Trump recently appeared on the Kremlin-sponsored network, where he refuted the idea that Russian agents could’ve been responsible for hacking the DNC.

“He’s got other staffers…so the proof is there,” McMullin said. “This is absolutely objectionable and an American president should never have these kinds of warped views of a Russian authoritarian like Vladimir Putin.”