Is Sarah Palin Retreating, or Reloading? 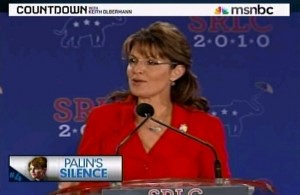 In the days following the massacre in Tucson, former Alaska Governor Sarah Palin has become a focal point in the media conversation about the shootings. The confluence of her March posting of an electoral map that featured crosshairs over shooting victim Gabrielle Giffords‘ Congressional district, Giffords’ own denunciation of the image at the time, and Giffords’ current struggle to survive that shooting has linked Palin to the shooting, despite a lack of any evidence of a causal link. Aside from some ludicrous backstopping by an aide and a partial email to Glenn Beck, however, the normally loquacious media supernova has been uncharacteristically silent on this issue. What’s her  next move?

Keith Olbermann noted Palin’s absence, and the mounting pressure on her to respond, on Tuesday night’s Countdown. In teasing the segment, Olbermann repeatedly hypes a clip of Governor Tim Pawlenty (R-Mn) “calling Palin out,” which looks like a comical overstatement when you see the clip: (from MSNBC)

As Olbermann notes, it is a testament to Palin’s power in the conservative movement that such a mild statement by Pawlenty could be considered “calling out,” but that’s the position Palin currently holds, a conservative Olympian among mortals.

However, that position could be in jeopardy. As Chris Matthews noted earlier on Hardball, Palin’s “crosshair map” has become inextricably linked to this shooting, like a 21st century Google version of Poe’s Telltale Heart. As responsible media figures point out time and again, there is absolutely no evidence of a causal link, nor is anyone in the mainstream media suggesting one, but the juxtaposition will continue to dog Palin unless she does something to mitigate it.

It is unquestionably true that attempts by figures like Markos Moulitsas to blame Palin for the massacre even as it unfolded (and get in a quick book plug, to boot) were utterly reprehensible, an assault on decency that should have been rejected by any who saw it. Ditto attempts to hang the tragedy on “the left,” or to Rush to weave conspiracy theories about it.

But anyone who thinks that Palin’s current situation is simply the result of political opponents pressing an advantage is not living in the real world, and doing Palin no favors. Had Kos and company never uttered a peep about Palin’s “crosshair map,” it would have held off the spotlight for a matter of hours, until someone found the interview of Giffords denouncing the crosshair image over her district. Any news editor who failed to note that interview would have to be fired for journalistic malpractice.

So far, though, the best thing anyone can say about Palin is that she didn’t cause the shooting. Everyone but her most ardent fans (or fearful rivals) sees that the crosshair image crossed a line that even the more common (but in hindsight, ill-advised) bullseye graphic doesn’t approach. Even at the time, conservative darling Elisabeth Hasselbeck recognized this, and said so. For everyone but existing Palin loyalists, this argument is over.

Palin’s response, then, is crucial to how she will be seen by those she hopes to woo, either as a candidate or a media figure. She could have remained silent, and rode the thing out. Such a strategy had a decent shot at success, especially given her brief, but appropriate, initial statement on the shooting.

Unfortunately, that ship sailed when SarahPAC aide Rebecca Mansour floated a ridiculous trial balloon, trying to recast the map’s imagery as “surveyor’s symbols,” despite Palin’s own proud acknowledgement of their meaning. Whether sanctioned by Palin or not, Mansour’s attempt showed a defensiveness that could be interpreted as consciousness of guilt.

Glenn Beck tried to pitch in on his radio show, reading part of an email from Palin which said “I hate violence. I hate war. Our children will not have peace if politicos just capitalize on this to succeed in portraying anyone as inciting terror and violence.”

The problem is, no serious person is accusing Palin of inciting this incident. The imagery was widely condemned at the time, and as Olbermann pointed out, reinforced by Palin time and again, and this tragedy has sickeningly, indelibly illustrated that point.

Since silence is no longer a real option for Palin, she ought to come out and say something, and perhaps she is preparing to do just that. One option would be to double-down, to defend her choice on the same free speech grounds that she deployed in defense of Dr. Laura. This would surely please her fans, plus a lot of other conservatives who feel besieged by the “violent rhetoric” meme that has emerged. It would also have the illusion of consistency going for it.

But to many who haven’t made their minds up about Palin, that course would seem cold and stubborn.

An apology would certainly be leapt upon by Palin’s critics, who would use it as an admission that she’s unfit to hold office, and who would slam her for waiting so long to issue it. The thing is, they’re doing that anyway.

The advantage of an apology, though, is that it gives Palin the chance to place the issue in its proper context, to say “I shouldn’t have used that image, I’m sorry I did, but it did not cause this tragedy. Focusing attention on a poor decision that I made does a disservice to the lives that were shattered on Saturday, which should be occupying all of our hearts and minds.”

Such an apology would have the added advantage of being the right thing to do. Sarah Palin is not the victim in this story, but neither is she its villain. Her part of this conversation should end, and she should be the one to end it.