‘It Seems Your Party Lies A Lot’: Cavuto Battles Dem Congressman Over Which Party To Blame For Sequester
video

‘It Seems Your Party Lies A Lot’: Cavuto Battles Dem Congressman Over Which Party To Blame For Sequester 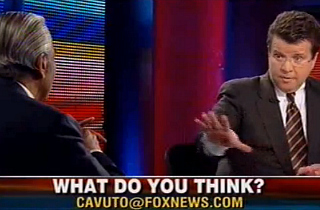 Fox’s Neil Cavuto and Rep. Charlie Rangel (D-NY) went head-to-head Friday afternoon over which party is responsible for today’s budget sequestration, and whether the Democratic Party’s push to tax the rich is an honest maneuver.

After initially imploring both parties to “get their act together,” Rangel took a swipe at the political right, saying that “you can’t just save money by cutting off people and firing people during the recession.”

“You just zoomed them,” Cavuto said, referring to wealthier Americans that Rangel would like to tax more. “You just hike their taxes, limited their deductions. They’re looking at you and saying, ‘Enough.'”

“It’s easier to hike taxes than cut expenses,” the host later explained. “Maybe you can disavow the notion that you would sooner hike than cut any time every time.” Challenged by Rangel to clarify, the Fox host replied, “I’ll cut to the chase. It seems that your party lies a lot.”

“Forget the parties and the lies,” the Democratic congressman pushed back. “The facts are just too simple. Nobody’s going to tell you that just cutting and laying off people during a recession is good for the economy.”

Cavuto later confronted Rangel with a poll showing that “6 out of 10” Americans believe automatic budget cuts are how the government will get the budget deficit under control. “Nobody said you shouldn’t have revenue and tax cuts, both of them. You shouldn’t have just tax cuts. You should have something to get people back to work,” Rangel responded.

“Republicans are members of Congress and haven’t been giving anything,” Rangel said when grilled over how Republicans had to swallow a bitter pill with the last budget deal, and feel “snookered” out of a deal this time. “It’s a stupid attitude that some people have signed and said under no circumstances should anyone have a tax increase.”

“When it’s 40-plus to 1 tax hikes to spending cuts, can you blame Republicans who are looking at this and saying no?” Cavuto pressed.

Ultimately, Cavuto concluded the battle, saying, “A pox on both your houses.”

“A pox only to the extent that we didn’t get along,” Rangel said, “but don’t say that you just have to do cutting.”

“Well, then don’t say you have to just do revenue,” the Fox host shot back.