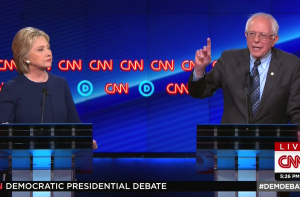 I didn’t watch CNN’s Democratic debate Sunday: if I wanted to watch old white people yell at each other for two hours, I have The Expendables on DVD. But as best as I could tell from social media and angry thoughtpieces afterwards, Bernie Sanders said something deplorably and horribly sexist to his opponent Hillary Clinton.

Clinton getting a good dry run tonight for a fall debate against a dismissive, mocking male candidate hitting her on trade and Wall Street.

I cannot believe I just saw Sanders talk to Clinton that way. I am so fucking pissed. #DemDebate

@Shakestweetz My young daughter spit at the TV. I told her to stop. But it was her instinct. Even as a kid she’s seen men do this to women.

A man always telling a woman when to talk. #DemDebate #FlintDebate #ImWithHer

“The moment looked bad for Sanders. He came off as a man shouting down a woman,” Vox weighed in. New York Magazine declared it “arguably sexist.” So what was it Sanders said that was so problematic?

Oh, it’s slightly worse in context of course; Sanders was pretty clearly irritated and not being polite. But that was only after Clinton interrupted him first.

I happen to agree with New York Magazine that the moment was “arguably” sexist, but only because there is no short supply of Internet warriors who will argue that any criticism of any prominent woman under any circumstance is sexist. Already, Hillary supporters have informed the media that words like “difficult” and “inaccessible,”  and “polarizing, calculating, disingenuous, insincere, ambitious, inevitable, entitled, [and] over confident” are all now sexist when applied to Clinton. That these words are applied to male candidates every day is apparently besides the point.

Anyone who has watched any debate in the past twenty-odd years ought to know that interruptions are frequent, and that the interrupted candidate often speaks up for himself. Male candidates regularly talk over each other, jockey for speaking time, and get cross when they don’t get their way. To suddenly see it as “patronizing” and beyond the pale when applied to a woman is nothing more than a convenient double standard.

I’m sure there are Clinton supporters who would agree that Sanders has a right to call out another candidate when they interrupt, but just didn’t appreciate his tone or phrasing. There’s something to that; obviously you can voice a legitimate criticism in a way that’s still sexist (“Shut your mouth, you shrew,” e.g.).

But what exactly did they want him to say instead? If I were to recommend a way for his to reclaim his time, I would say start with something polite– “excuse me,” perhaps– followed by something that indicated that it was his turn to talk– maybe “I’m talking.”

Did he say it angrily? Of course he did, because he was interrupted literally seconds into his answer. I’d have to believe Clinton would have snapped at that, too. At the end of the day, Sanders had to interrupt Clinton, and there was nothing he was going to say or do that would contain the wrath of those see anything less than complete adulation of Clinton as inherently evil.

The real irony here is that it’s Clinton’s defenders who are actually reinforcing sexist stereotypes. By demanding special rules and that the media and fellow presidential candidates alike treat Hillary Clinton with kid’s gloves, they only encourage the perception that are women frail and unable to hang with the big boys. Clinton is a former Secretary of State and trial attorney who promises to stand up to Vladimir Putin and powerful Washington interests. But now we’re being told that she’s too much of a dainty flower to handle a gibe from a scrawny senior citizen.

And I’ll close with this warning to the Clintonistas: it’s a very real possibility that Clinton faces Donald Trump in the general election. Unless you want to become the girls who cried wolf, maybe save the incessant sexism allegations for the actual sexism.