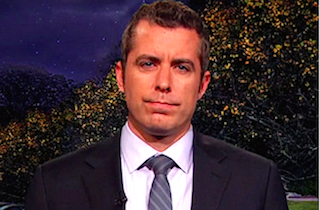 When Jason Jones announced he was leaving The Daily Show to star in a new show for TBS, the project was widely described as a “sitcom.” But in an exit interview with The Daily Show podcast, Jones made pains to clarify that that’s not exactly the case.

The nuance of that point was somewhat lost of head writer Elliott Kalan, who joked, “And it involves situations, a ‘sitcom’ if you will.”

RELATED: Why Doesn’t Anyone Want to Replace Jon Stewart?

“No situations,” Jones replied. “It’s a show about nothing, completely original. Never, ever been done with any success.” He described it as a “TV-MA family comedy” that will chronicle a family road trip from Syracuse to Ft. Lauderdale with the entire season taking place over about seven days. “And every season, we take a new vacation,” Jones said.

Meanwhile, Jones’ wife and fellow correspondent Samantha Bee is also heading from Comedy Central to TBS, where she will host a new show in which she can “apply her smart and satirical point of view to current and relevant issues.” So, definitely not a sitcom and perhaps something closer to what Jon Stewart has been doing for the last 16 years.

Listen to the audio below, via The Daily Show:

You can download the full podcast episode on iTunes.