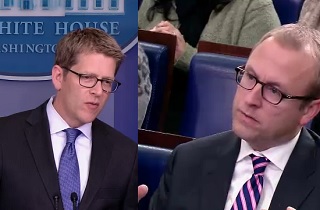 In the months-long media debate over the rollout of Obamacare and its website, opponents of the law have repeatedly tried to link health care reform with failures of past presidencies, including the Iraq War. At Monday’s White House Daily Briefing, ABC News Chief White House Correspondent Jonathan Karl found a clever way to invoke that comparison, repeatedly asking Press Secretary Jay Carney if this weekend’s re-launch of Healthcare.gov is “Mission Accomplished.”

“In terms of the goals you set for this moment, in terms of the website being functional for the vast majority of users, is it Mission Accomplished?” Karl asked.

Carney ignored the reference at first, responding that “We were working very hard to make the necessary fixes to improve the website so that by December 1, it would function effectively for the vast majority of users. The metric that we use to measure that has to do with response time, and the stability of the site, and the error rate.”

Carney referred Karl to the improvements that CMS has reported, and added that “We have passed an important milestone in that effort, but the work continues.”

“Let me try to crystallize that,” Karl said, trying again. “Very clearly, in terms of the goal that you set for this moment in time, is it Mission Accomplished?”

“Using…” Carney began. “That phrase is not one that I would employ. We were able to make the necessary improvements to the website so that the vast majority of Americans who use the website can have an experience in which the website functions effectively. It does not mean, as I said in November and October, it does not mean that there will be no problems with the website going forward. That does not even occur on the most highly functional private sector website. What it does mean is that we have made significant progress. We have made the improvements to the system that we hoped we could, and then more work continues.”

Karl also asked about comments by Robert Gibbs about the need to fire someone over the website’s difficulties, and Carney replied, as he consistently has, that the focus now is on addressing the problems with the site, and the program.