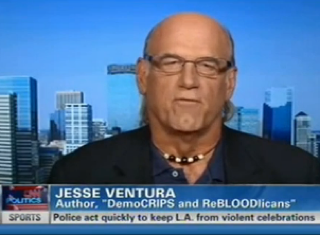 “I’m not a complainer, it doesn’t require complaining, they ruined our country,” Jesse Ventura began his interview today on CNN’s Starting Point, where anchor Christine Romans about his book and his quest to destroy the two-party system. Discussing his latest book in which he insists Democrats and Republicans are basically Blood and Crip gangs, Ventura posits that politicians should wear NASCAR-style sponsored suits and fits in a plug for Libertarian candidate Gary Johnson.

RELATED: On Piers Morgan: Jesse Ventura Rails Against The Political ‘Gangs’ Taking Over The Country

Ventura argued that, with a century of Republican or Democratic control of the government, “we have a national debt that’s out of control, they send us to wars we shouldn’t be fighting in.” He noted that “for thirty years, half my life, we’ve been at war,” arguing that the parties are like gangs, “only worse because the street gangs only affect a minority amount of people in the areas they are located.”

Roland Martin jumped in to point out that in at least one salient respect, they are like gangs: “the parties are going to punish their own for not abiding to a set of, this is what we actually believe in.” Ventura agreed, adding that the political system was “based on bribery,” and that he would like to see politicians wear NASCAR-style uniforms, “that way we know who owns the candidates.” Aside from that, he would like to see candidates listed without “gang names– just print all the candidates’ names, then the voters can educate themselves.” He also railed against Citizens United, which he argued made the corporate ownership more obvious. On this point, he received some pushback from Margaret Hoover, who argued that “it makes donations transparent,” which fuels the NASCAR uniform argument.

Ventura ended the interview on a positive note for one politician though: Gary Johnson, who he argued was the choice for people who “really want to rebel.”