Jimmy Kimmel Goes After Obama, Republicans And The Press At W.H. Correspondents Dinner

Kimmel Goes After Obama, GOP And The Press At Corrrespondents Dinner 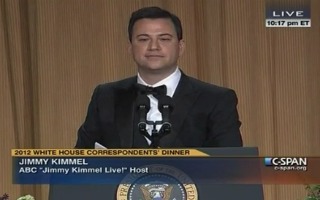 Jimmy Kimmel, host of ABC’s Jimmy Kimmel Live, took to the stage to close the night at the White House Correspondents’ Dinner. Kimmel took jabs at members of the Obama administration, Congressional Republicans and Democrats, artists and journalists alike during his comedy set.

Kimmel thanked the President for his appearance tonight, saying “salaam.”

“Mr. President, I know you won’t be able to laugh at any of my jokes about the Secret Service so cover your ears if that’s physically possible,” said Kimmel. “If this had happened on President [Bill] Clinton’s watch, you can damn well bet those Secret Service agents would have been disciplined with a very serious high five.”

Kimmel joked about the General Services Administration’s scandal, the President’s ability to compromise with the Republican party by conceding to their demands and White House advisor Peter Orszag.

Kimmel also joked about the journey the country has taken with Obama from 2008 to today and how so much has changed. “Mr. President, remember when the country rallied around you in hopes of a better tomorrow,” asked Kimmel. “That was hilarious.”

“They say diplomacy is a matter of carrots and sticks,” Kimmel said. “And since Mrs. Obama got to the White House, so is dinner.” Kimmel went on a tear about the President’s weight loss and how that reflects on the state of the nation. Targeting Michelle Obama, Kimmel said, “look, it’s [New Jersey Gov.] Chris Christie. Get him!”

“Just to clear things up for the extreme right-wingers, here is the difference between Bill Maher and Rush Limbaugh,” said Kimmel. “The people who watch Bill Maher know he’s an asshole.”

Kimmel said he had a theory about the assassination of Abraham Lincoln, after noting O’Reilly wrote a book on the subject last year, saying “I have my own theory about Lincoln’s death. I think John Wilkes Booth was innocent. I don’t even think it was an assassination. I believe Lincoln had a vision about what the Republican party would become in 150 years and killed himself.”

Kimmel said that the President was “candid” in an interview when he called artist Kanye West a “jackass.” “No offense sir, but I think you got the wrong West. I think you meant Allen,” said Kimmel in reference to Florida Republican Rep. Allen West.

Democrats, too, were the target of Kimmel’s jokes. “[Rep.] Nancy Pelosi believes in lipstick like she believes in government,” said Kimmel. “Too much is never enough.” He said that Jake Tapper wrote that joke as well.

Kimmel took aim at Keith Olbermann, too, saying “the thing about Keith is he is so likeable.” Kimmel continued, “Al Gore launched Current TV in 2005 and it took off like a North Korean rocket.”

Watch part 1 of Kimmel’s set below via C-SPAN:

Watch part 2 of Kimmel’s set below via C-SPAN: