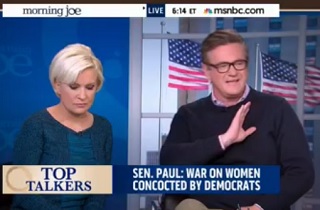 Several liberal websites are slamming MSNBC host Joe Scarborough for merely asking, after the rapid passage of “a gazillion years” in Morning Joe time, whether Sen. Rand Paul (R-KY) had a point when he said that Hillary Clinton should answer for her husband’s scandal involving then-White House intern Monica Lewinsky. Along the way, though, they missed Scarborough’s declaration that the reason he’d “never bring it up in a gazillion years” is that “it’s just like the Iraq War in 2003.”

Co-host Mika Brzezinski expressed lingering doubts about how former President Clinton “got off pretty clean,” but panelist and PoliticsNation host Rev. Al Sharpton pointed out that “I don’t think Bill Clinton disagrees that what he did was wrong, but I think we are dealing with, Bill Clinton is not in the political discussion today. If the shot is to try to bring this back up, to take a shot at Hillary Clinton, I think her posture is much different than his.”

“Let’s just ask this question,” Scarborough cut in, “because I would never that stuff in a gazillion years, it was such an ugly chapter in our history, and you know what? It was just like the Iraq War in 2003. There are just some things, we fought those battles. Let’s let them go.”

After the shortest gazillion years in history, Scarborough continued, “That said, if Hillary Clinton attacks the Republican Party’s handling of women, and treatment of women and disrespect for women, and suggests they’re misogynists et cetera, et cetera, et cetera, it does seem to be a fair question to ask right now, a few years out, does the media have a responsibility to say, ‘Well, let’s see what happened when you were in the White House, and how women were treated when you were in the governor’s mansion and the White House?’ Is that fair?”

To summarize, Hillary Clinton’s husband’s conduct while she was First Lady, and she was participating in an effort to reform health care, is like her vote in favor of the Iraq War in that it should never be brought up in a gazillion years.

Time’s Mark Halperin later agreed that the media has a responsibility to bring up the scandal, and Brzezinski added that it’s “a legitimate argument,” but Rev. Al Sharpton asked “Are you now saying that women are responsible for the behavior of their husbands?” and said “I dare the Republicans to take that to her, because if I’m her, I would dribble, hit the backboard, and score a three-pointer from way out, because she was the wife in this. She was not one that I would want to mess with.”

Update: Joe Scarborough had the following Twitter reaction to being quoted directly and precisely:

Mediaite's suggestion that I found moral relevance between Lewinsky and Iraq was pathetic. I never remotely suggested any thing of the kind.

Mediaite’s suggestion that I found moral relevance between Lewinsky and Iraq was pathetic. I never remotely suggested any thing of the kind.

For the record, neither did we. “Hillary Clinton’s husband’s conduct while she was First Lady, and she was participating in an effort to reform health care, is like her vote in favor of the Iraq War in that it should never be brought up in a gazillion years” is an accurate description of what Scarborough said. Only he knows why he thinks the Iraq War should never be brought up in a gazillion years, or why Hillary Clinton’s potential share of responsibility for Bill Clinton’s behavior should have been brought up this morning, but their very lack of moral similarity is what made the quote noteworthy.