Joe Scarborough On Susan Rice, Candy Crowley, And Intel Community: Why Can’t They Get The Story Straight? 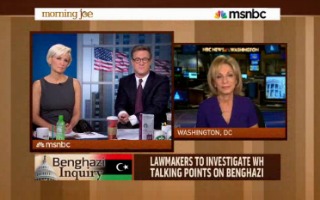 On Monday, the team at Morning Joe tackled the mixed and at times conflicting messages the American public — and, indeed, some government officials — have been given regarding the September 11, 2012 attack on Benghazi.

MSNBC host Andrea Mitchell pointed out that one criticism being lobbed against UN ambassador Susan Rice is that she did not question the declassified information handed to her before she went on her Sunday morning show rounds — criticism that Rice’s defenders say is unfair and amounts to “character assassination.” The real question here, Mitchell added, is why the intelligence community — now and back at the beginning of the war in Iraq — is giving the American public information that isn’t censored or filtered so much as completely different from what they know or suspect is the truth.

Joe Scarborough drew attention to Maureen Dowd‘s NYT piece, “Is Rice Cooked?,” opining that, if the script Rice had been handed was indeed inaccurate or misleading, the onus was on her to not read it. Here’s the relevant excerpt:

Some have wondered if Rice, who has a bull-in-a-china-shop reputation, is diplomatic enough for the top diplomatic job. But she would have been wise to be more bull-in-a-china-shop and vet her talking points, given that members of the intelligence and diplomatic communities and sources in news accounts considered it a terrorist attack days before Rice went on the shows. (The president and his spokesman also clung to the video story for too long.)

Rice should have been wary of a White House staff with a tendency to gild the lily, with her pal Valerie Jarrett and other staffers zealous about casting the president in a more flattering light, like national security officials filigreeing the story of the raid on Osama to say Bin Laden fought back.

Scarborough then assessed that presidential debate Candy Crowley had “for some reason,” “[made] up history on the run” in stating that the President had offered to the attack at terrorism as soon as the day after.

Why, still, a month and a half later, he wondered, can the intelligence community not get its story straight? Is this a case of politicizing intel?