Joe Scarborough To DC: Stop Telling Us About Why The Other Guy Comes Up Short 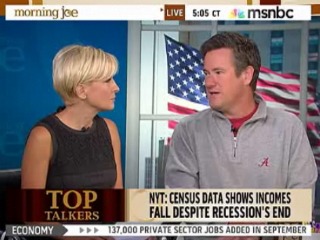 This morning on MSNBC’s Morning Joe, host Joe Scarborough took a moment to vent about about the in-fighting within Washington.

He pointed out an article in the New York Times that, as he described it, said that the mess we’re currently in where the economy and jobs are concerned is “worse than a recession.” The paper reported that, post-recession, incomes fell 6.7 percent between June 2009 and June 11, compared with a fall of 3.2 percent between December 2007 and June 2009, or during the recession. This weekend on Meet the Press, Sen. Paul Ryan criticized the President’s efforts to revitalize the economy by relying on a “reshash” of older plans that have already proven to be ineffective. And, in his weekly radio address, President Barack Obama told Republicans who think they have a better plan to “prove it” — all resulting in quite a frustrating time, to put it mildly, for Americans who are struggling right now, or who are looking to their government officials for answers, only to find squabbling.

I mean, while Republicans and Democrats fight and do nothing, millions and millions of Americans suffer. Suffer so much. And the suffering continues. Part of the problem with the decline in income is the fact that people have given up looking for work, because there are no jobs to be had.

I’ve made no secret of the fact I like Paul Ryan very much, ideologically, on small government issues, I am very lined up with him. I’ve known him for a very long time. But even me, with as much as I like Paul Ryan — and it’s not about Paul Ryan — this is a warning to my Republican friends: When I hear Paul Ryan talking like that, I start to think “even guys up there that I like are another planet.” I don’t want to hear you talk about why Barack Obama’s got it wrong anymore, or when Barack Obama talks about the Republicans and George W. Bush, I feel the same way. I feel like they’re on another planet. Stop talking to us about why the other guy comes up short. Start talking to each other.