John Popper Talks Libertarianism: ‘If You’re Pro-Gun And Pro-Gay Marriage, What Line Do You Stand In?’ 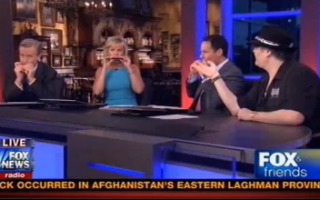 Blues Traveler’s harmonica-wielding frontman John Popper visited Fox & Friends in Tampa Monday morning, where he talked about his libertarian views and his issues with Barack Obama, as well as with the two major parties.

Popper had performed at Ron Paul’s rally Sunday night, and shared that, while he’s always been a libertarian and is generally a fan of Paul, he does disagree with him on certain issues, namely foreign policy and abortion.

That said, the singer noted that Paul’s speech resonated with him, particularly the former candidate’s emphasis on liberty and galvanization. “I think the Republican party,” said Popper, “is painted as this sort of… unified, sort of Orwellian organized party, and the Democrats are always painted as some sort of, you know, populist disorganized group that’s very ‘of the people.’ But what I saw yesterday was a bunch of people who really wanted to come together, who felt a similar view in some ways, but also wanted to express a different view. And I think it was kind of a refreshing thing to see. I see Ron making the moral argument that I can really get behind.”

“I don’t think I can vote for Barack this time,” said Popper, who’d voted for him in the last election. “Well, the thing is, Barack Obama is a great guy and I think that he’s charismatic, wonderful. I love that he’s broken so much ground. I mean, obviously being the first person of color to be president was important, and when I was a little kid, I was promised I’d get to vote for the first person of color for president.”

“Where did he let you down?” the hosts wanted to know.

“I think the problem is that he’s a Democrat,” and Popper replied, “and it’s not him that I’m worried about. It’s the people standing behind him that tend to want to feel my pain with me and I want to feel my own pain.”

But it’s not as if the Republicans don’t have problems of their own, he added. “I have a lot of problems with them as well. But what I can’t stand is — what I need is Tort reform. What I need is to do away with the capital gains tax. What I need is pro-choice. What I need is, I’d like the legalization of marijuana.”

“But if you’re pro-gun and pro-gay marriage, what line do you stand in?” Popper asked, prompting the hosts to push for Romney.

Popper then shared that he thinks things become “messy” when one party is in power too long, and another reason he’d voted for Obama is because Republicans had been “getting a little too much of what they wanted” over the previous eight years. “I think what it really comes down to,” he said, “is just shaking up the glass ball.”

Have a look at his interview — and his gift for the hosts — below, via Fox News: