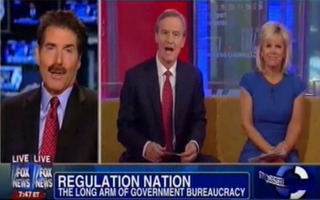 Fox Business Network host John Stossel appeared on Fox & Friends Thursday morning to discuss an upcoming topic on his libertarian-leaning program that will tackle the unintended consequences of regulating businesses and enforcing nondiscriminatory hiring practices, particularly the Americans with Disabilities Act. Stossel, who included himself as a disabled American due to a stutter he’s overcome, said that the law “makes us a threat” to a potential employer.

“Is over-regulation killing our economy?” asked co-host Gretchen Carlson as she introduced Stossel, who will tackle that topic in-depth on his program Thursday night.

“So the government doesn’t want people to die and they want businesses not to prosper, but that’s what they wind doing, isn’t it?” co-host Steve Doocy asked Stossel.

“They say ‘we can’t let you die,’ so they pass a rule. But the regulator thinks he’s not doing his job unless there’s more and more and more rules,” said Stossel. “So, they don’t say they want to kill business but the result is that they do. And they are just indifferent to it.”

Stossel went on to identify one law with what he believes came with particularly egregious unintended consequences: The Americans with Disabilities Act.

That was supposed to help disabled people in the work place. 51 percent of the disabled were employed when they passed the rule. Now it’s down to 32 percent. So, fewer people got into the work place. The law has the opposite effect because it makes us – I include myself because I stutter but I’ve largely gotten it under control – it makes us a threat. Would I have gotten my first job in TV has my employer known, we may never be able to fire this guy if he doesn’t get his speech under control because he could sue us and winning would cost us half a million.

“What about banning interns,” asked Carlson.

“The Labor Department says if you don’t pay an intern – if you get a college student and you don’t pay them – that’s exploitation,” said Stossel. “And that’s how I’ve gotten half of the research done in my career because we couldn’t afford to pay researchers.”

Finally, Doocy asked Stossel to weigh in on “tiny little service horses.” To which, Stossel replied that the government is forcing stores to let those horses in under threat of penalty, “you can’t toilet train them,” said Stossel. “Store doesn’t have the right to make a choice? No.”