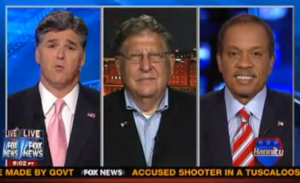 Sean Hannity and his panel butted heads on Tuesday night as they tackled President Barack Obama‘s recent comment about government’s role in prospering American business. John Sununu and Juan Williams clashed over Obama’s message, with the former arguing that Obama has consistently been condemning success.

The Obama remarks in question, with some added context (emphasis mine on the controversial bit):

If you were successful, somebody along the line gave you some help. There was a great teacher somewhere in your life. Somebody helped to create this unbelievable American system that we have that allowed you to thrive. Somebody invested in roads and bridges. If you’ve got a business — you didn’t build that. Somebody else made that happen. The Internet didn’t get invented on its own. Government research created the Internet so that all the companies could make money off the Internet.

The point is, is that when we succeed, we succeed because of our individual initiative, but also because we do things together. There are some things, just like fighting fires, we don’t do on our own. I mean, imagine if everybody had their own fire service. That would be a hard way to organize fighting fires.

Countering Hannity’s assertion, Williams insisted the comment is not damaging in any way for the president. He then proceeded to use Hannity as an example, articulating that while Hannity is “a talented communicator,” he’s gotten where he is through opportunities created by Roger Ailes and Rupert Murdoch. To say he did everything on his own, Williams said, is simply not true. Hannity, in turn, mocked him, adding that “we wouldn’t be here if our moms didn’t change our diapers.”

Sununu unsurprisingly found himself disagreeing with Williams, asserting that all Obama has been doing “is condemning success.” Williams reminded him that Obama’s the same president who bailed out Wall Street, which is full of capitalists — and went on to bring up a disputed point about tax cuts. Inevitably, that led to shouting over ObamaCare, and whether that is a tax hike, which Sununu contended it is, while Williams vehemently disagreed.

Eventually coming back to the central point, Sununu argued Obama’s statement about success was “an absolute disgrace” and “insulting.” He further added that it wasn’t smart for Obama to “reveal his real feelings that way.”