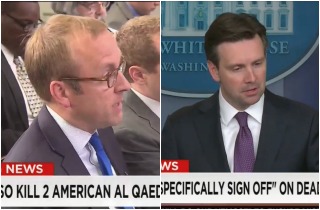 The drone strikes, which also resulted in the deaths of an American and Italian hostage, targeted al Qaeda leader Ahmed Farouq and propagandist Adam Gadahn. Both Farouq and Gadahn, though, were American citizens, which has caused civil liberties advocates to question why they were targeted in the first place.

Still, Karl pressed him about the DoJ regulations: “But is it legal under the guidelines that this administration has put in place — is it legal to kill American citizens who do not represent an imminent threat of violent attack against the United States?”

Earnest maintained that international law allows the U.S. to carry out counterterrorism operations in areas that are, according to the “near certainty” of intelligence officials, “frequented by al Qaeda leaders.”

Watch the full exchange below, via CNN: