Joss Whedon Is Our Master Now
the aughts

Joss Whedon Is Our Master Now 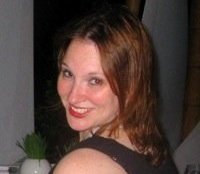 When I say the name “Joss Whedon,” the faithful say “Amen!” But the rest of the world says, “Who?”

Joss Whedon, the creator of “Buffy the Vampire Slayer” (the film and the series), “Angel,” “Firefly,” “Serenity” (the movie based on “Firefly”), and the most-recently-cancelled “Dollhouse,” is not the household name he should be. But his fans, and the writers and actors who work with him repeatedly across multiple series, are the knowledgeable insiders. We’re the collective Alfred in his Batcave, except we’re not keeping his secret: we’re telling everyone. We see his tremendous impact on popular culture today and predict its continuation in the years to come.

The name “Buffy the Vampire Slayer” inspires scorn from those outside the cult, but fans worship at the altar of Buffy. We’re almost a family. We dissect the relationships and themes of maturation and female empowerment on the show. We talk about the evolution from “Buffy” to “Angel” as a rite of passage into adult darkness, and the hellmouth as a metaphor for the unknown elements that may destroy us. We love that even stiff-upper-lipped authority figures have a dark side: “Ripper” had his youthful experimentation with dark forces, while Wesley’s dark side is explored on “Angel.” We fell in love with new characters in “Firefly,” only to have them ripped away, returned briefly for “Serenity,” and then ripped away again. “Dollhouse,” now in its final episodes, will likely follow suit: we can reasonably expect that there will be casualties. 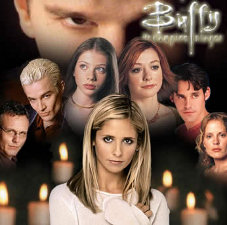 But the stories, the reruns, the mythology, don’t seem to die. After the Buffy cancellation, a virtual “Season 8” was published in graphic novel form, and now there’s a Willow-themed comic out as well. In the case of the space western “Firefly,” the fans created demand for a movie (“Serenity”). After one season, “Dollhouse” was about to be cancelled, but fan outrage earned not only an unaired prequel on the DVD for Season 1, but a stay of execution resulting in a second season. Attention, networks: do not anger the Whedon fans. You wouldn’t like us when we’re angry.

Here are reasons that Joss Whedon’s experience, humor and energy will see us through the next decade.

In the last decade, we’ve seen a lot of uncertainty, a lot of pain, terror and evil threatening to devour us. We’ve seen the rise of a technology that acts as a great equalizer at the same time as it looms threateningly. Many of us are asking ourselves essential questions of identity and belonging. We suffer personal, professional or financial losses and then have to go on to save the world every day, if not on a literally global level, then internally as we work on ourselves and our immediate ‘verse of people. 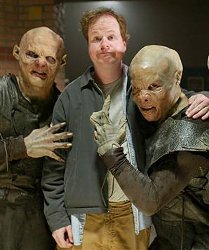 Although forces may arise and threaten to devour from beneath you, you should always fight. As a certain vampire once said, “Let’s get to work.”

Here’s to another ten years of bigger and better things for Joss. Although, as megafans, we’ll all argue that Joss’ work can never be better than itself, only the same high level of quality, depth, emotion and humor, with themes and characters we can believe in. Like the t-shirts say, “Joss Whedon is My Master Now .” Resistance is futile – this is Whedon’s world, and we’re just lucky to be living in it.

Esther D. Kustanowitz is a Los Angeles-based writer and consultant specializing in social media, religion and popular culture. Esther’s blogs, MyUrbanKvetch.com and JDatersAnonymous.com, have attracted a loyal following, and she regularly contributes to Beliefnet’s Idol Chatter, a blog about the intersection of spirituality and popular culture. She dreams somewhat nonspecifically, yet enthusiastically, about being creatively involved in a Joss Whedon project. You can read more about Esther’s work at EstherK.com.
﻿