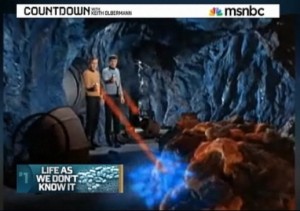 Thursday night’s Countdown presents a near-existential dilemma for conservatives, many of whom have a Comic Book Guy-esque devotion to all things Star Trek. Host and liberal bogeyman Keith Olbermann not only displayed an impressive grasp of the Trek canon, he did so at the expense of a NASA scientist, a feat which surely must transcend ideological rancor.

The subject was NASA’s much-ballyhooed discovery of a new form of life, and while Olbermann may have out-geeked the space agency’s best and brightest, he and guest Derrick Pitts seem to have missed a glaring facet of this story.

NASA has discovered a bacterium that can substitute phosphorus, one of six basic building blocks of life, with arsenic, which led one scientist to compare the discovery to the Horta, a silicon-based life form from an old Star Trek episode. Unfortunately, the would-be Trek-spert® didn’t exactly have a Vulcan Death Grip on Federation lore, as she misidentified the episode title, calling it “Dark Evil.”

Luckily, Olbermann was there to swoop in and correct her:

The episode was, indeed, “The Devil in the Dark,” but while Olbermann’s contention that the Horta was “Phaser resistant” isn’t an out-and-out falsehood, it is somewhat misleading, giving the impression that the weapons were ineffective against the creature. As a cursory review of Mr. Spock’s mindmeld with the distressed life-form attests, this is simply not true:

Of course, lost amid the breathless excitement of discovery, and Pitts’ happy-talk of rewriting textbooks and finding alien life, is the one fact that doesn’t seem to be disturbing anyone but me: NASA has engineered a bacterium made of poison!

Am I the only one who thinks this could lead to a cataclysm that would make The Walking Dead look like a psoriasis pandemic? And why arsenic? Couldn’t they have first tried to replace the phosphorus with bacon, or that delicious cheese they put in the middle of Combos? Finally, if these NASA eggheads had paid even the slightest bit of attention to Star Trek, they would have known that this is a heinous violation of the spirit of the Prime Directive, if not the letter.

I never thought I’d say this, but I think I’m with Cheney on this one. There’ll be a biohazard suit in my trunk first thing tomorrow morning.