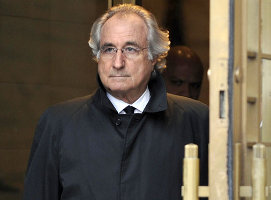 Bernie Madoff’s in prison, but new details about his massive Ponzi scheme keep on emerging. The latest revelation, via ABC News: JP Morgan Chase, which did significant business with Madoff, suspected something was amiss with his operation’s abnormally high return on investment before he was arrested…but kept on doing business with him anyway.

For this, the company now faces a $6.4 billion lawsuit filed by lawyers working on behalf of Madoff’s victims. Apparently, JP Morgan Chase’s London office alerted U.K. authorities to their concerns via a “Suspicious Activity Report,” but they never shared these concerns with anyone in the U.S. What were they? The whole report is available here, but no snippet is more telling than this one:

“[T]he investment performance achieved by [Madoff’s] funds…is so consistently and significantly ahead of its peers year-on-year, even in the prevailing market conditions, as to appear too good to be true – meaning it probably is.”

Yeah, we’d say they were right on that. But it also appears JP Morgan Chase had other, crazier things to worry about:

The company filed the report, an attorney for JP Morgan would later say, after a representative of a Madoff feeder fund became angry when JP Morgan began removing money from the fund. The representative of Geneva-based Aurelia Finance, which was acting as an advisor to one of the feeder funds, allegedly hinted at violence against the JP Morgan employee involving Aurelia’s “Colombian friends” who could “create havoc.”

And you thought the Madoff saga couldn’t take any other bizarre twists and turns. Of course, though, the main focus will remain on the people Madoff’s scheme hurt. Brian Ross, author of a book on Madoff, spoke to one victim recently – and in addition to (obviously) feeling cheated by Madoff, she thinks the Securities Investor Protection Corporation and Congress are also letting victims down. Video of the segment in what is an increasingly strange, sad tale below. Be warned: there is a mention of Bernie Madoff nudity. (We told you this is strange stuff.)