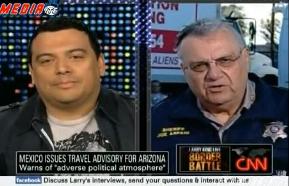 In a showdown no one saw coming, comedian Carlos Mencia (formerly of the Comedy Central “comedy” show Mind of Mencia) squared off against Sheriff Joe Arpaio of Arizona’s Maricopa County. Why? Who knows, but this is what happened.

Mencia, who was introduced as someone “born in Honduras and raised in East LA,” started his opening argument like this: “I am not carpooling in Arizona, I’ll tell you that right now.”

The crowd went wild. (Actually – silence.) More from the mind of Mencia. “It would be easy to profile everyone, but this isn’t right,” he said. Now, Sheriff Joe Arpaio (“America’s Toughest Sheriff”), your turn: “We don’t take people off the street corners, or go into residences or businesses. We don’t do that. We have a state charge first and then we develop that to see if people are here illegally.”

If you have a guy that’s Mexican-looking, Latino-looking, and he’s wearing a hat and pointy boots, a thick belt, that guy may look illegal. But you put that same attire on a white guy and he’s a redneck.

The decision to set the debate up between a comedian (debatable, if you’re Joe Rogan) and a Sheriff seems like an odd choice for an issue that’s fairly serious. And to see it happen on CNN in prime time only serves to highlight the location of the stand-off – Larry King’s news program, swinging the pendulum between hard and soft news as vigorously as any on TV. But the juxtaposition of guests was strange.

One side note: Last night Carlos Mencia thought he was having a Twitter debate with Sheriff Joe after the appearance. Except that account was opened last night too – the Real Sheriff Joe goes by that specific Twitter moniker.