Last Comic Standing Winner: Seinfeld ‘Has No Idea What It’s Like’ to Be Black or Woman 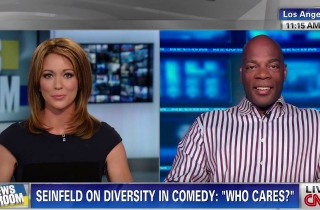 Comedian and Last Coming Standing winner Alonzo Bodden joined CNN’s Brooke Baldwin on Wednesday to provide his perspective on the controversy surrounding comedian Jerry Seinfeld dismissing the need for racial or gender-based quotas in standup and the comedy industry in general. Bodden told Baldwin that the controversy surrounding Seinfeld’s comments was mostly a manufactured one, but the host of the web series Comedians in Cars Getting Coffee also “has no idea what it’s like” to be a woman or a minority.

“You’re funny, I’m interested. You’re not funny, I’m not interested. And I have no interest in gender, or race, or anything like that,” Seinfeld recently said at a CBS News/BuzzFeed Brews event.

“Upon hearing it, I can see where people might mix up what he was saying,” Bodden said of Seinfeld’s comments. “But I think his show – I always looked at that as more of his friends that he was talking to.”

“It seems to me, maybe the majority of his friends are white, male comics,” he continued. “I didn’t see his show as something being cast like a network comedy.”

“This is a web series,” Bodden added. “I mean, it would be a podcast if it wasn’t for the fact that Jerry’s so famous, so the fact that he has his friends on doesn’t seem unusual to me.”

“On the other hand, Jerry has no idea what it’s like to be a black comedian, or a Latino comedian, or a woman, so he doesn’t know that you have to burst through certain barriers,” he concluded.