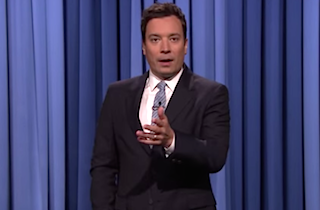 Fallon also did well in total viewers, growing more than 15% compared to the previous week to 4.076M. At the same time, Fallon’s competition was down compared to the week prior. Kimmel not only came in second place in the demo but also total viewers with 2.612M. Letterman was third with 2.297M.

On YouTube, Fallon also had an incredibly strong week. While his “Evolution of Dad Dancing” with Chris Christie reached 5 million viewers and his “Tight Pants” bit with Jennifer Lopez topped 8 million views, it was the trailer debut for Dumb and Dumber To that won the week with an impression 20 million+ views as of Thursday.

And, since today’s late night viewers are not only watching on TV, here’s a look at the most popular video for each of the three shows last week on YouTube (as of Thursday, June 19):

In the 12:35pm slot, Late Night with Seth Meyers was up compared to the previous week to 1.663M total viewers and held steady with a 0.59 rating in the 18-49. Meanwhile, CBS’ Late Late Show with Craig Ferguson dropped in total viewers to 1.182M and was up very slightly to a 0.29 rating in the demo.