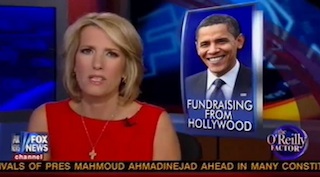 The Republican War on Cool continues. Despite the fact that this is a Republican Party who worship at the alter of a president who was LITERALLY A MOVIE STAR, actors are now the enemy. Hell, I wouldn’t be surprised to see a Republican Senator start devising a Hollywood blacklist for “Cool People Sympathizers.”

For the latest instance of this celebrity shaming, check out Laura Ingraham’s segment on last night’s O’Reilly Factor.

Ingraham, sitting in for Bill O’Reilly, started things off by proclaiming “Hollywood’s passionate love affair with President Obama” still going strong, the word “passionate” finding an extra one or two syllables in her mouth so that it could really be imbued with the proper dripping disdain. What was the topic of conversation? The President’s fundraising dinner at George Clooney’s house which was treated here with as much scorn as if Obama was spending his time going to strip clubs with Ron Jeremy and Joseph Stalin.

“Doesn’t this just kind of prove Republicans’ point that Obama is really just, y’know – he’s more comfortable in the celebrity set. He is kind of a celebrity president. He’s kind of like Ryan Seacrest. He has that celebrity aura about him. But it doesn’t quite work for the economy.

At some point, I think, when you appear in all these shows and it is funny in the moment and it is beyond just a once-a-year are White House Correspondents’ Dinner. It’s singing with Al Green or hanging out with Mick Jagger. Whatever it is. Brangelina. after awhile you look at the country and we’re going down the tubes, we’re in decline and, at some point, it kind of all looks like one big reality show, doesn’t it?”

My favorite part of those quotes was when Ingraham says “celebrity president” in a way that implies she just made up that clever insult on the spot.

Anyway, the point is clear; having friends with rich entertainment people is bad. Unlike, say, having friends who are rich oil people or rich coal people. That just makes you a good businessman.

Panelist James Hirsen agreed with Ingraham, arguing that all this celebrity hobnobbing was “desperate” on the part of the Democrats.

That’s so true, Hirsen. The people having fundraising dinners with the richest members of their base are the desperate ones. Not the people doing nonstop TV appearances trying to persuade America that the guy from ER is pure evil.