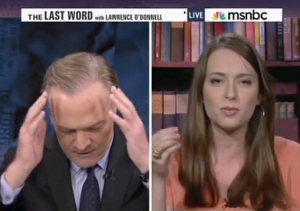 Lawrence O’Donnell opened his show Wednesday night taking on President Obama‘s plans to skip a planned meeting with Vladimir Putin. The conversation was quickly derailed as New Republic writer Julia Ioffe disputed O’Donnell’s assertion that Russia has complete and total control over Edward Snowden‘s actions. O’Donnell repeatedly and exasperatedly jumped in to lecture Ioffe about how Putin in fact does have that much power over Snowden, telling her, “Let’s not be ridiculous about this!”

O’Donnell asserted that Russia was “in complete control of the outcome of what would happen to Snowden the second he arrived at that airport.” Ioffe shot back that Snowden’s become a “headache” for Russia, but when a plane carrying the Bolivian president was downed because authorities thought Snowden was on board, “there was really nothing the Russians could do.”

O’Donnell couldn’t believe what he was hearing, telling Ioffe Russia has “complete power over his every breath in that country.” Ioffe told him, “I think people who haven’t been to Russia tend to overestimate their abilities.” But what really set O’Donnell off was when Ioffe said Putin is not personally writing scripts for news anchors, merely sends a “signal” out to government-controlled media outlets.

O’Donnell half-shouted, “We’re getting absurd now!” Ioffe wryly asked, “Have you reported out of Russia?” O’Donnell shot back, “Let’s not be ridiculous about this!”, stating firmly, “The Kremlin owns them, Julia!”