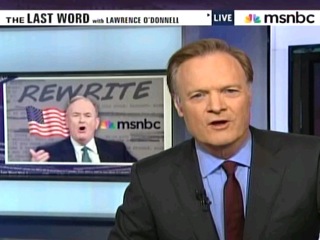 The new, shaken up MSNBC 8 PM hour has been a relatively mum place in its infancy, at least with respect to how loud the anti-Fox News rhetoric once was there. It may have not hit the ground running, but tonight, Lawrence O’Donnell finally defined the post-“Special Comment” war on Bill O’Reilly and made one thing crystal clear: there will be no vein-popping fury at O’Reilly as long as O’Donnell has his say, because, at the end of the day, “he is just a joke.”

O’Donnell had no airs of passion or rage at the fact that O’Reilly is taken seriously, nor did he attack O’Reilly’s intelligence or personal life, yet it was, perhaps, the single most personal attack O’Reilly has received at such a venue. O’Donnell described him as “a very, very,very rich man who has grown phenomenally rich by playing a character on TV for the most gullible audience in the history of TV falls for”– much more of a Stephen Colbert sort of take on the man than anything else. And with a dismissive, cautiously smug air not unlike that O’Reilly himself has used on MSNBC, O’Donnell not only identified that character, he dismissed it entirely:

“When I look at O’Reilly, I also see dozens of guys I grew up with just like him: overbearing, argumentative Irish guys who think they know everything and can back up nothing. Those guys have always been a joke to me, which is why O’Reilly almost never has the capacity to outrage me. Because he is just a joke to me most of the time. But when he blares homicidal encouragement for killing physicians who perform abortions he deserves all the serious minded condemnation he has received.”

He goes on to praise others at MSNBC for condemning him, and mocking his “faux Irish tough guy style.” For those in the in-group– working class Irish men with names like O’Reilly and O’Donnell– the tactic was flawless rhetoric (for those in the out-group, it was uncomfortable, but tonight just wasn’t about us). “Billy Boy,” O’Donnell lectured, “I know real Irish tough guys. They don’t look like you. And sound like you. And none of them come from Long Island like you. And none of them go to work in makeup like you.” O’Donnell stopped short of adding “I would know,” but for anyone watching, it was readily apparently he was speaking to precisely the sort of audience that would know– an audience O’Reilly considers himself a part of, and has not quite been so directly alienated from publicly before.

O’Donnell revealed his willingness to engage in a no holds barred street fight by opening with a clip of O’Reilly talking to Dick Morris and warning that people listen to them both. O’Donnell insisted on dragging out Morris’s past and, by arguing that Morris is on Fox News because “his record with prostitutes make him unemployable anywhere else,” creating an distracting, rather sleazy elephant in the room. But beyond his needless barbs lay a message O’Reilly is quite unused to hearing: not that he is outrageous, mean, insulting, uninformed, or dangerous, but that he’s not to be taken seriously.

It’s hard to imagine Bill O’Reilly would want to respond giving his past history ignoring individual MSNBC hosts, but it’s safe to say he has rarely, if ever, been taken on so personally and dismissively. O’Donnell used only a fraction of the outrage usually reserved for O’Reilly during this hour and calmly reciprocated years of O’Reilly treating the network like a small dog nipping at his feet based mostly on ratings dominance. There were several misses– the needless prostitution jokes, the emphasis on ethnicity that inched perilously close to cringe-worthy– but at least the latter was strategically justified if only because this is likely (and for the sake of ratings, hopefully) the first in a series of similar attacks, and O’Donnell needed to come out of the gate strong, if not contrived. And O’Donnell does still suffer from coming off as somewhat derivative– of both O’Reilly and his predecessor. But the show is in its infancy. There is still time to find a voice– now that the gauntlet has been thrown, he’ll need one to wage this battle should O’Reilly take the bait.