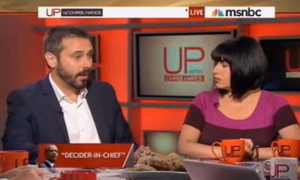 On Sunday’s Up with Chris Hayes, The Nation‘s Jeremy Scahill, during the panel’s discussion about President Barack Obama‘s foreign policy record, took a critical look at MSNBC’s coverage of the Democratic National Convention.

Scahill noted that Obama used the killing of Osama bin Laden “as a football to spike on the national stage” — adding that the president used the achievement in “a jingoistic way.” The Daily Beast’s Michelle Goldberg begged to differ, arguing that it would have been “political malpractice” to avoid mention of the bin Laden raid. There are two different things, she said: The discussion about the president’s foreign policy and the discussion about how they’re using that foreign policy “to win a very important election.”

“But many of the media discussions, including here on MSNBC, about foreign policy during the convention felt like we were watching an Obama for America meet up,” Scahill argued. “Not an actual serious critique of this president’s most egregious aspects of his foreign policy, where you do see that of the Republicans.”

On that note, he added, “There’s all of this going after Romney, and I think that’s completely legitimate — but some of the core issues of this president’s national security policy are not being debated. And I’m sorry, but watching John Kerry and Joseph Biden criticizing the war in Iraq? They voted for the war in Iraq.”

Scahill went on to decry “revisionism” and “jingoism” — noting that he was talking about “life and death issues.”