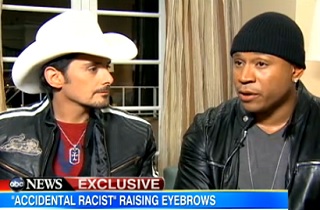 LL Cool J and Brad Paisley have been receiving a steady stream of criticism over their well-intentioned, horribly misguided duet Accidental Racist, which posits the wearing of Confederate flag apparel as merely an acceptable expression of Lynyrd Skynyrd fandom, and suggests that tolerance of gold chains is a fair exchange for letting slavery “bygones be bygones.”

Paisley and LL responded to the uproar in an exclusive interview with ABC News, in which they explained the intent of the song, and kinda made things worse.

The song contains lyrics like Paisley explaining that “the only thing I meant to say is I’m a Skynyrd fan” when he put on his Confederate flag t-shirt, and LL offering to “forget the iron chains” if Paisley agrees not to “judge my gold chains.”

In their interview this morning, Paisley thought it was worthy to “ask the question,” while LL offered up a Martin Luther King quote to explain the spirit of the song.

“Martin Luther King had an interesting quote. He said darkness doesn’t drive out darkness,” LL said. “Only love can. We’re talking about forgiveness and compassion.”

“I’m not advising anyone to actually forget slavery but what I am saying is forget the slavery mentality,” he continued. “Forget the bitterness. Don’t get bitter, get better.”

The problem, of course, is that the white character in the song doesn’t decide to stop wearing Confederate flags, which makes the bitterness tough to forget. A good way to drive out the darkness would be for Brad to see the light, and be like “Okay, maybe I’ll just get a shirt that says ‘Lynyrd Skynyrd’ on it, and looks like a Jack Daniels label.”

If he wants to show pride in where he’s from, he could wear a t-shirt with that country’ actual flag on it, or one that says “L.A.”

Still, chalk that up to an opportunity missed, by a fictional character in a song. These are just characters, trying to illustrate the first steps toward getting past longstanding resentments, even if it does horribly equate things that are in no way equal. Kinda like LL telling ABC News’ Paula Faris that “(S)ometimes I put a skull and crossbones on and, you know, my wife gets upset with me, but I’m not a pirate.”

That’s true, such apparel isn’t likely to offend many victims of Johnny Depp‘s historic oppression, but that’s not really the point. LL added, indicating Paisley, “So if my man got a Confederate flag on, that doesn’t mean he’s a confederate soldier.”

Wait, what? I thought this was all some hypothetical deal, you mean to tell me that Brad Paisley actually wears shirts with Confederate flags on them? So, wait, 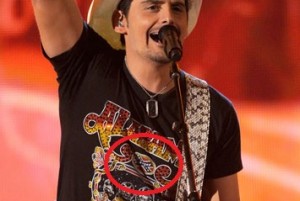 Brad, I know LL is trying to be nice, but it is not okay to wear Confederate flags if you’re trying to fight racism. We get that your heart is in the right place, and you wanted to start a conversation about racism, but normalizing a symbol of it is not the place to start, or finish, that conversation.

Here’s the interview, from ABC News: