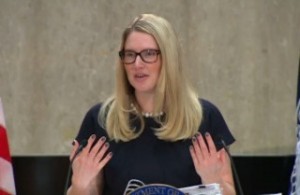 If there’s one thing cable news doesn’t even attempt to do anymore, it’s nuance as one Marie Harf is quickly finding out.

You probably know by now why Ms. Harf is all the rage today on the outrage front: During a Monday appearance on MSNBC’s Hardball with Chris Matthews, the 33-year-old Harf–who somehow serves as Deputy Spokesperson for the State Department–became the top-ranked human piñata for many in media after this exchange with the host:

CHRIS MATTHEWS: Are we killing enough of them?

HARF: We’re killing a lot of them and we’re going to keep killing more of them. So are the Egyptians, so are the Jordanians. They’re in this fight with us. But we cannot win this war by killing them. We cannot kill our way out of this war. We need in the medium to longer term to go after the root causes that leads people to join these groups, whether it’s lack of opportunity for jobs, whether…

HARF: We can work with countries around the world to help improve their governance. We can help them build their economies so they can have job opportunities for these people…

Matthews went on say (correctly) that Americans don’t have the luxury of time for anything resembling a longer approach, as the U.S. will continue to be “humiliated morally.”

First, a few thoughts on Ms. Harf from a communications/presence perspective before getting to the main point: She does appear over her head and probably needed a few more years in a lower-level position before representing the Department of State on CNN, MSNBC and Fox, where she has appeared in primetime and mornings lately. You watch her and just get the feeling she’s like a graduate student in debate class ticking off foreign policy talking points with no real conviction or worldview of her own.

In short, the person holding such an important position needs to have some gravitas on this kind of stage, but like Susan Rice…she doesn’t provide any confidence that State in his good hands run by capable people. In Harf’s case, the joke about her running a pledge class on a campus near you doesn’t seem so far fetched, particularly when considering her way-off-base Mean Girls complaints she made about one cable news host in the not-so-distant past.

All of that said, what Harf said isn’t about not killing our way out of the problem isn’t exactly a foreign concept. Young Muslims are joining ISIS just as much because they’re looking for meaning and importance in their lives just as much as for religious reasons. Many are uneducated and rudderless with no future. ISIS — as perverted and medieval as it is — offers a future into something with purpose, even if that purpose mirrors that of the Third Reich.

We have to make sure that, as we fight terrorism using military means and legal means … we also have to put hope back into the hearts of people. We have to show people who might move in the direction of terrorism that there is a better way.

We’re going to have to put in place a very comprehensive and robust strategy to help the — the world of Islam and — and other parts of the world reject this radical violent extremism.

Or Chairman of the Joint Chiefs, Adm. Michael Mullen, to the House Armed Services Committee in 2008 on the importance of improving nation-building initiatives:

We can’t kill our way to victory, and no armed force anywhere — no matter how good — can deliver these keys alone. It requires teamwork and cooperation.

But because Harf has the aforementioned gravitas issues and with ISIS serving a clear and present danger as the backdrop, the result is what we’re seeing and hearing across most of the cable news and even some programs on MSNBC: A mob rush, a pile-on. Why? Because our media is so baked in opinion these days, nuance never survives outside of one deep-dive segment on John Oliver’s Last Week Tonight. In 2015 and particularly on cable news, it’s all about taking an 8-15 second sound bite and squeezing all the outrage possible out of it without looking for the bigger context or past sentiment. Or… it’s about doing a panel discussion in an eight-minute block with four people fighting for airtime in-between sound bites. Do you think any layer deeper than definitive simplicity gets explored very often in those segments? Rhetorical question.

Clearer heads–or those not playing to their audiences perpetually screaming for some the usual red meat–would have easily found or remembered that the likes of Powell, Bush, Romney or Mullen said the same exact thing as Harf. However, she should still absolutely understand the way the game is played these days:

Nuance or complexity doesn’t fly in today’s ADD media, where hit-and-runs happen every day — just the targets change — as Harf is certainly learning this week.