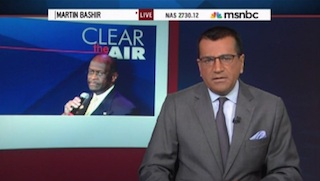 There’s been a lot of hyperbole and biased reporting throughout the Herman Cain sexual harassment scandal. Fortunately though, there’s been one voice of reason and objectivity out there in Martin Bashir, a man who’s covered the story with sophistication and poise.

Ok, that might not be true. I think I’m just distracted by Bashir’s British pronunciation of “harassment.” HARE-essment. Harassment. God, that’s classy sounding.

Today, during Bashir’s “Clear the Air” the danger of America being “seduced” by Cain’s devilish sense of humor. The host described how the nation has been won over by Cain’s jokey attitude and smooth singing. However, unlike his fellow MSNBC host, Rachel Maddow, Bashir saw the true evil under this wacky performance.

“Because Mr. Cain is such a showman, because he preaches the need for a sense of humor, it’s easy for us to be seduced by his rapid-fire one liners, his singing of “imagine there’s no pizza,” and his smoking chief of staff. It’s all good fun. But, while Mr. Cain’s campaign might be a joke, his conduct, his alleged conduct, is not. In fact, as the accusations pile up, Mr. Cain seems less funny by the day and more like a dirty old man.”

You hear that, America? Basically Bashir’s point is that Herman Cain has us trapped in a car, his one hand up our skirt and the other on the back of our head while he asks, “Hey, you wanted a laugh, right?”

Watch the clip from MSNBC here: