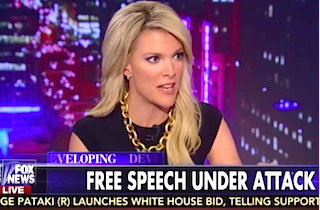 Thursday morning, during a contentious interview with Pamela Geller, CNN’s Chris Cuomo attempted to draw an analogy between holding a Muhammad cartoon contest and saying the “n-word.” As he put it, “the ‘n-word’ gets treated the same way that depictions of Muhammad does. We don’t say it because it’s offensive, not because legally I can’t.”

This idea not only rubbed Geller the wrong way but also appeared to bother Fox News’ Megyn Kelly, who invited National Review editor Rich Lowry on her show tonight to discuss it.

“His view is she’s not allowed to have a ‘Draw Muhammad’ contest because in his view, he has pronounced that is offensive,” Kelly said of Cuomo. “The question is offensive to whom, Chris?” she asked later. “There is a group that finds this offensive, and there are tens if not hundreds of millions who have no issue with it whatsoever.”

Lowry, in turn, defended Geller’s right to run cartoons of Muhammad on Washington, D.C. buses, saying, “they may be offensive, but they’re not gratuitously offensive because she wants to include the line ‘support free speech.’ That is a political message and a political message that should be entirely unobjectionable.”

Kelly also brought up a tweet that Cuomo sent out regarding hate speech, which he later admitted was “clumsy” in its argument. “That tweet is totally wrong. It’s wrong in every way it can be wrong. I don’t even have the time to explain to you how wrong that is,” the host said. “So he got called out, and he never really admitted how wrong he was.”

“Now he’s shifted to, ‘but it’s morally wrong, it’s offensive,'” Kelly added of Cuomo. “And once again he doesn’t get the position, which is the reason the speech is so important is because it is in defiance of somebody trying to impose their ideals on the American people.”

And watch the full interaction between Cuomo and Geller below, via CNN: