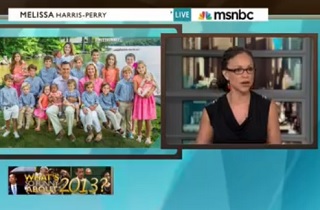 On Sunday’s Melissa Harris-Perry show, the eponymous host led a panel of entertainers in a rundown of the “photos of the year,” which somehow included a Romney family picture that “a lot of people had emotions about,” according to MHP. The setup seemed to leave room for unlimited comic potential, but the panel immediately honed in on the race of Kieran Romney, adopted grandson of former Republican presidential candidate Mitt Romney, who is black. The baby, not Mitt.

“Everybody loves a baby picture,” Harris-Perry said, “and this was one that really, a lot of people had emotions about this baby picture this year. This is the Romney family. And, of course, there on Governor Romney’s knee is his adopted grandson, who is an African-American, adopted African-American child, Kieran Romney.”

Comedian Dean Obeidallah chimed in by reducing the baby to a token. “I think this picture is great,” he said. “It really sums up the diversity of the Republican party, the RNC. At the convention, they find the one black person.”

Whatever you think of the quality of the jokes, using a baby to make a political punchline is a tough sale, with a high bar for comedy and commentary. The joke can’t simply be that the baby is black, and the Romneys are white. Conservative Caleb Howe at The Right Scoop zeroed in on the problem with this narrow premise:

It’s funny because Romney is white and his grandson isn’t, which is obviouslyhilarious. Because as everyone knows, the races should not mix.

Another possible premise would have been to wonder how many children have to be put up for adoption because of Republican policies, or just from being fired by Mitt Romney. Maybe they could have thanked the Romneys for not naming him “Trapp.” Anything would be better than this.

Selecting this picture at all was a stretch, since there doesn’t seem to have been much controversy caused by it at all. There was actually some criticism, though, of the name that Ben Romney and his wife Andelynne Romney chose for the baby. Kieran is the Gaelic word for “black.”

But even that ripe-for-commentary fact should not be pegged to a family photograph. It plays like a stretch of an excuse to point and laugh at a black baby who was adopted by America’s whitest family. That’s not a joke, that’s his family now.

Here’s the clip, from MHP: